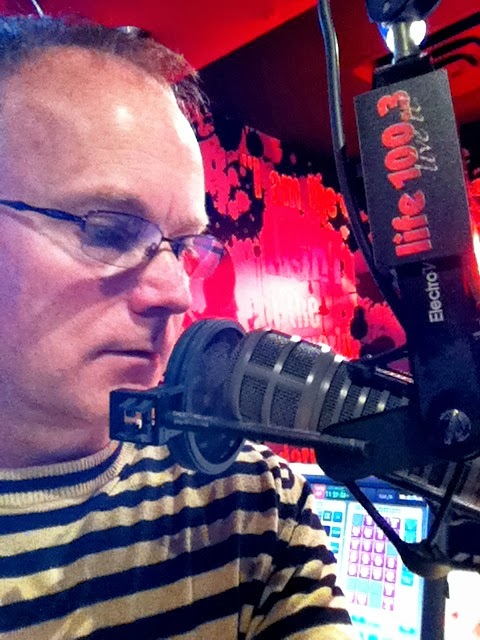 I’ve been on-air at every radio station I’ve worked at - either daily shifts, or fill-in here and there. From my first job doing evenings in Kingston at CKLC where I found my on-air personality (which often upset the program director), to growing up a wee bit and doing afternoon drive at CHAB in Saskatchewan, to various other shifts at an oldies station, a classic rock station, a Christian station in Nashville - up and down the dial - to here at LIFE 100.3. There was only one radio job where I did not work on the air - HITS 103.5, now Z103 Toronto, at which I was the program director.

A few years ago, I did my last regular daily shift on LIFE 100.3. It was 10-Noon. It was, in my mind, the perfect time slot because it allowed me to get the creative out of the way in the morning and focus on management detail in the afternoon. It was a great balance.

Why did I stop? Well, I came off the air when my undiagnosed depression made me unreliable. I’ve not been back on the air, daily, since then, instead just filling in here and there.

A year after, the depression became somewhat controllable but I lost my zeal to "entertain" every day, or to be honest, wanting to be on the air. I started to feel like I had said all I wanted to say. If I had to ask a caller, "So when do you put your Christmas lights up?" one more time, or any other interactive question, or take caller 7 to win a prize, one more time, I thought I would die.

In the Spring of 2011, I was on a radio trip out west and I was introduced to a DJ in Edmonton; a rather famous guy whom I had listened to on a Toronto radio station when I was just a teen in high school. It was cool meeting him and seeing him on the air, still doing an on-air shift after all those years. I asked him, "So, you’re on-air, no management position for you?" He told me he had done management and he was happy just doing the DJ thing where the responsibilities were less.

I told him, I had come off the air recently and felt I had done every radio bit and didn’t feel like going on the air again.  What he told me was very wise. He said, "It’ll come back." I’ve been waiting three years - it hasn’t.

Most broadcasters start on the air because it expresses an alter-ego. I'm blessed because my radio job is also my hobby and I don’t know where the line is between the two, and I don’t care - I love radio that much. But finding the zeal to go on the air and run contests and take phone calls and intro songs - it’s just not in me right now.

I love hosting the Saturday morning Retro Show. I enjoy researching the music and putting together the show - for now that seems to use all the gas in the tank. The office work, casting vision, making stuff happen - it's more gratifying.

However, those words from my Edmonton DJ friend still echo in my head - "It’ll come back - the desire will come back." I’m waiting.
Posted by Scott Jackson at 8:52 PM