BEHIND THE SCENES WITH AFT # 10 - STAGE ROADIE FOR AFT

This is the only photo of me taken during an Anthem For Today show that I know of.  To me, it is "the show within the show."   As the stage roadie for AFT, this is my usual position - crouched down in the pit, between the band and the audience, awaiting an urgent message from the stage. 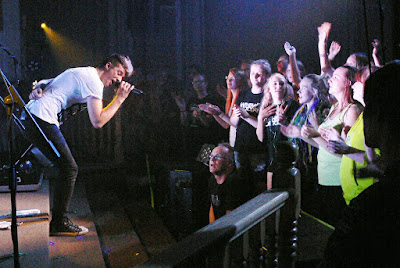 During the first song I am totally alert. If something is going to go wrong, it will happen in the first minute. From my position, I'm watching for cues from the band about something they need adjusted. Often it's the in-ear monitors where one guy wants more guitar or less vocal. Each guy has a different mix and when once the audience is in the room, the acoustics of the room change. I'm the guy who relays that information to the front of house mixer Evan Duran​.

If I'm not down in front, I'm off to stage left or right, picking up subtle cues, or helping swap guitars or pulling sweaty jackets off without disturbing their guitar cables that run up their backs.

It always amazes me how all the musicians know where I am.  Because of the lights on the trees above the audience, usually the band can't see past the first row, especially if the Leco spot lights are on, but somehow we make eye contact.

The non-verbal, mime-only communication is especially magical with band lead singer Pip Lucas. Pip is able to convey most things to me with nothing more than a quick finger gesture. Sometimes, it's the in-ear mix he wants changed, or he wants a bar stool, or a towel, or wants to drop a song.

In most cases the audience would not notice our invisible communication.

Depending on the venue, I may have to push kids back from the giant sub speakers, on which, we have two LED lights. These are easily aimed and a bump from the audience could knock them off target, so it's my job to re-aim them to center stage.

Beyond stage roadie, my role with AFT is also Business Manager, Road Manager, Merchandising guy, Booking Agent and Personal Manager - I'm not sure which one I love more. I'm glad I don't have to choose.
Posted by Scott Jackson at 10:32 AM No comments:

I like Terry Fox stuff almost as much as I like the Rolling Stones and Geoff Moore!

﻿ There is a touring exhibit about Terry's run, now in its 35 year, on display at the Museum of History (Civilization) in Ottawa.

I followed it on the news in 1981. He was one year younger than me. Since then, I've been to the monument in Thunder Bay where he ended the run, the location where he started in St. John's and his gravesite in Port Coquitlam. (That makes me a stalker?)

Here's some of the display.

Posted by Scott Jackson at 8:34 PM No comments: