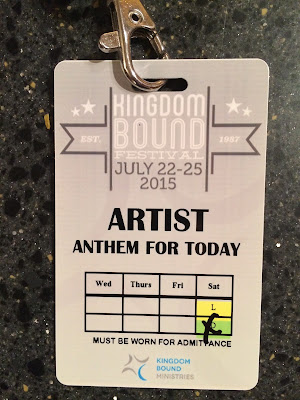 We headed down a day earlier to ensure we wouldn't be late due to traffic or border crossing issues or getting lost - nothing would hold us back. And, we breezed across the border without any problems, just a minor speeding ticket in Pembroke NY, and then a quick check-in to our hotels and cabins, rode some rides, met a zillion fans, and experienced a few blessings.

The one thing that impacted me was the size of the festival. Not the attendance but the structure of the operation. Having been to the festival many times, I always saw it from the fan point of view, which is still incredible. But from a band point of view, another world opens up - a world of volunteers working in many departments, and I'm sure I only saw a sliver of the organization.

For example, our credentials allowed us to eat catered meals backstage with the VIPS. There were greeters, a dozen or more servers at the buffet and a dozen chefs. Awesome food and incredibly organized.
﻿

There was a transportation department for picking up artists at the Buffalo airport and then shuttling artists, like us, on the grounds around the pedestrian traffic to wherever we needed to go - from the dinner area, to the stage - anywhere without problem.

The festival organizer is Donna Russo who has "coordinated" the show for many years but she has a team of managers, and people under each of them. I can't imagine the systems they have in place to make sure everyone is communicating and doing what they need to be doing, across the many acres of theme park and four days of scheduling. Truly unbelievable. And, she had time to hang out with us!

﻿﻿The biggest blessing for me and the boys came from Denny Keltzman. Denny was the festival Stage Director, hired independently for this specific event, who oversaw all the roadies, the union guys, the volunteers, the bands, the band crew - everyone. Denny has been the Road Manager for all of dc Talk's shows, and an endless list of other artists.

Through a friend with some backstage pull, I was able to get the boys backstage on the P.A.C. stage, before soundchecks for a tour of the stage set-up - with Denny.  Denny spent nearly an hour with us, explaining contracts and riders, how soundchecks are handled, how cues are given to the local production guys and which bands soundcheck and which ones....don't.  We saw how organized the side stage is to roll off one drum kit and roll on another - already positioned on a riser. It was an incredible hour of information from a veteran stage director, who took the time to pour into ....little old us.  Unforgettable experience. For me, it was the highlight of the entire two days at KB.

﻿﻿﻿﻿﻿﻿We were contracted for two engagements.  First, in the morning at the Amped tent, with the middle schoolers. The boys hung out, jumped around with the kids, and ended with a Q&A by the kids.  Erik Arneth was the director of the Tent - a total-kid person and very charismatic!

Then, we played on the Park Stage at 4:30. The artist on before us had a very small audience of maybe 25 people so we worried that our audience wouldn't be much bigger, but it grew - maybe 200 fans, many of whom came to see AFT!

The boys blasted through a five-song set! And .... then it was done!

Kingdom Bound - we LOVE you!

Below, some pics of our visit! 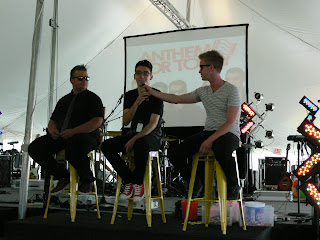 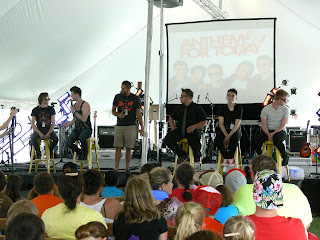 OUR SHOW ON THE PARK STAGE! 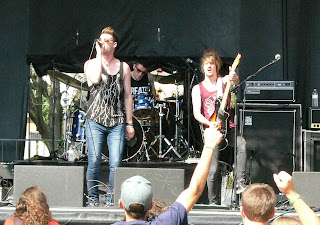 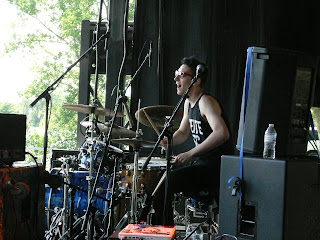 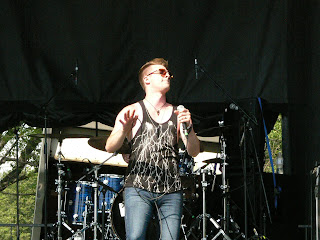 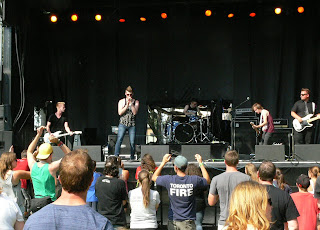 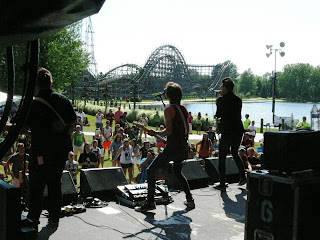 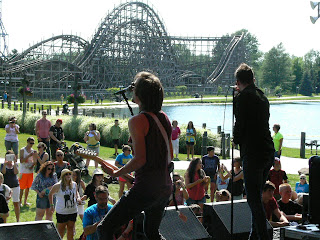 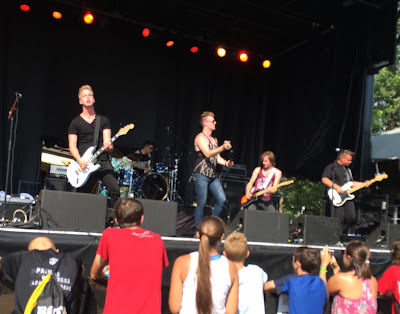 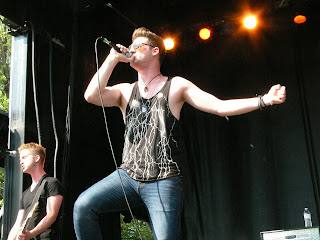 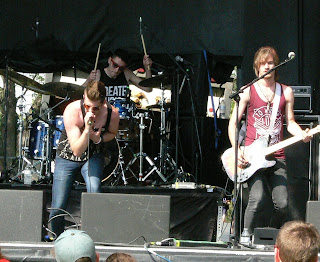 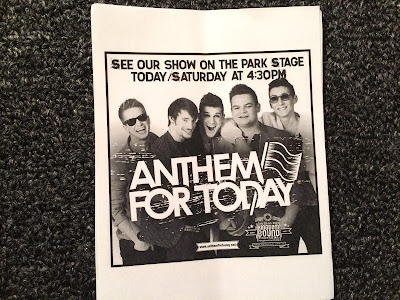 Posted by Scott Jackson at 10:09 PM No comments:

I MARKED MY BODY, AGAIN

Another painful tattoo. So why bother? Because once it's completed, it's fun to have. And, really, I witness to the tattoo artist, which is often in a dark-place location.

The tattoo artist told me, many people don't have a design in mind when they arrive. They look through the portfolios of the artists on staff, and then choose the artist, and then, casually pick "something".

Well, tattoos are forever so I go through a long self-screening process. To help me decide, I pray about it. I consider how visible it will be to the public (or old school clients) and how that may impact me. And of course, the significance of the tat.

Lastly, I run the whole deal past my wife. My body is her's and if I don't have her blessing then I won't do it. Having said that, it took many years to get her blessing on the first "bike" tat. One day she said, "well where on your arm would you put it?"  That got me over the hurdle!
﻿﻿﻿﻿
To people who love to rain on my parade, who will say, "Ooooh, 20 years from now it will look like a blurry blob of ink!"  Well, I'm 58 now so in 20 years it should still look ok. Then, at age 78, (if I make it that far), I'll probably have no hearing, be totally bald, probably have cancer or something awful, likely dementia, and my depression will probably be in full force - I think a tattoo will be the least of my worries.
﻿﻿﻿
﻿﻿﻿Thanks to Brian Carr, this tattoo has several components.
The whole thing took 2.5 hours, including a break. Cost: $200.

Some people collect their cherished memories on a charm bracelet or in photo albums. Tattoos are a conversation piece and if I'm asked, I get to share about the parts of the tattoo that I'm passionate about. (I also have my wife's and kids' initials tattooed on the inside of the same arm.)

Posted by Scott Jackson at 6:49 AM No comments:

On the staff promo TV in the radio station, we post a birthday greeting to the employees and their spouses and their kids.

This week was my birthday, and my Promotions Coordinator Pip Lucas posted a greeting. It was brilliantly creative and passionate and must have taken him hours. (Well, knowing him, about 15 minutes!)  He obviously knows the things I love and incorporated them into this greeting. 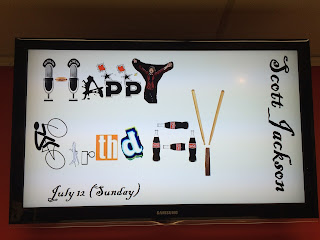 H - two radio microphones with an Arby's burger in the middle
A - the "A" font from the Alice Cooper logo
P - the "P" font from the Trooper logo, including the maple leaft, stars and lighting bolt that I recently commented on
Y - Mick Jagger
B - not just a cyclist, but the same image that is tattooed on my left arm
I - this is the best of all of them...a jet. As in "Jet" by Paul McCartney
R - the "R" font from the Door's logo
TH - the "TH" font from "That Thing You Do" movie
D - the "D" font from the candy "Nerds"
A - Coke
Y - two drum sticks (I play drums) and a Kit Kat chocolate bar stick!

What an awesome birthday greeting!*!  Thanks Pip! I'll remember this forever!
Posted by Scott Jackson at 10:00 PM No comments:

Today is the 4th of July. We, as non-Americans, all know it is "Independence Day". (Do the Americans know about "Canada Day"?  Says one of my friends - "What's that?" Of course, they don't.)

I worked in Nashville in 1996 and 1997. It was a life-changing event for me. And too short-lived, unfortunately.

But, I have many great memories, and since this is the 4th of July, I will share my two memories as a resident in the U.S.

The first was in 1996. My boss at WAY-FM Bob Augsburg led the staff to the roof of the WAY-FM building in Brentwood. We took our camp chairs up the steps and watched the fireworks display from the rooftop. The fireworks were amazing, but the party on the roof was the real memory. Good company, good people, special moment.

The next year me and my family went to the Nashville waterfront with a couple of friends. As we travelled down I-65, I noticed, once again, the homeless guys living under the bridges. I said to my friend Tim Cardascia - "How do you think that guy feels, living in a cardboard box, penniless, while the City blows up a million dollars of fireworks to celebrate?"  Tim said to me - "That guy is thinking - 'I'm an American and I love my country'."  I got chills.

Two great memories, of many, from my Nashville days. Happy 4th of July everyone!

Posted by Scott Jackson at 5:58 AM No comments: