JERRY LEE LEWIS - AND OTHER STUFF

Jerry Lee Lewis is a 50's pop star known for two songs "Great Balls Of Fire" and "Whole Lotta Shakin' Goin' On".  Now in his 82nd year, he performs less than a half a dozen shows a year. And one of them was in New York City at B.B. King's Bar and Grill, in Times Square.

The show lasted 40 minutes. We all stood as he "walked" on stage, looking elderly, white hair, pale face, hunched over, wearing a silver sequined jacket which fit him horribly. Being frail and unstable on his feet he was helped to the piano stool by two stage hands.

As prepared as I thought I was to see a feeble, elderly man, well past his prime, I wasn't. I lost it. It was beyond emotional. He reminded me of my Dad visiting my house, careful and slow to not miss a step as he walked over the threshold at the door.  Many times I thought, "this could be the last time I see my Dad."  And, one day it was.

As Jerry played, he reminded me of that.  I was crying, I'm not kidding.  It was overwhelming to be there. I wondering - is he doing this for the money?  Or because he still loves to perform?  I don't know.

Between his southern drawl and slurred diction, it was hard to understand him. But, he pounded the keys with fervor and that was exciting. The audience cheered!  Well, they cheered for everything!

This particular show was JLL's 82nd birthday.  His wife (7th wife) sat on stage taking pictures on her phone, sometimes getting in the way of the band. A fan went up to the stage with a birthday gift, wrapped in silver, and leaned over the monitor to hand it to Jerry. Jerry leaned forward and I thought - oh no!  He's gonna fall right over. A stage hand intercepted and tried to take the gift, but JLL grabbed it and sat it on the piano. Haha.

"Great Balls Of Fire" played, more or less. The band was average. They didn't perform. They just played, carefully, without enthusiasm. Not because they didn't care but probably because they don't have much energy left.

Then it was "Whole Lotta Shakin'"  - the place went bonkers!  And, I kid you not - at the end, Jerry stood up, kicked the piano stool backwards, flipping it over, just like he did when he was 25!  The place - went nuts! 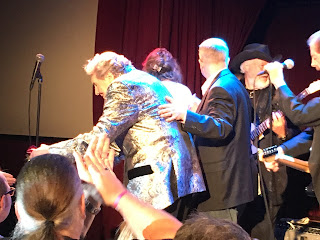 Then, his assistants came to him, and took him to stage right, where his wife was still rapidly taking photos as if it was his last show.  And then, they brought out a birthday cake with super candles with 18 inch flames shooted high.

Despite, my sad and emotional memory it was incredible!  I was in the second row, just off centre and it was worth every dollar. And this show cost me plenty.

It was like being with royalty. A man who gave so much to early rock and roll. He is a pioneer. He kicked man stools over, rocked many fans into a frenzy much like Elvis. He married 7 times, one time to his 13 year old cousin. He's had tax issues and been incarcerated. And who knows what else. But he's a pillar in pop music. And he's still doing it.

I'm so lucky to have been at this show. I was watching history. Gosh, I am lucky.

Here are some other highlights of my trip to new York. 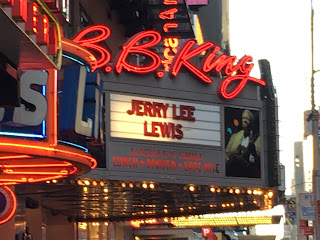 Posted by Scott Jackson at 4:29 PM No comments: