Twenty years ago today was my first day at WAY-FM.

Getting the job was a long process. It began with an application to their new station in West Palm Beach as it was about to launch. I applied twice - once as Program Director and once as Music Director. Realizing my dream to work as a Canadian in the U.S. was highly unlikely, not to mention the slim chance they would present another offer anyway, I decided to visit WAY in WPB, take a radio tour, meet Station Manager Dusty Rhodes and bring closure to the job I would never have.

While there, Dusty and I hit it off. He took me to lunch, and we visited the president of Radio Ink. He invited to his house for Christmas dinner, he took me to church and then he asked if I would send him a (no charge) report about what I heard. I jumped at the chance, and that report was sent to Nashville, where the President Bob Augsburg offered me the job of VP of Programming.

As I recall, I wasn't the first name on his list. Or the second. That's ok - I was stoked to have this amazing job! Evidently, I had "networking" experience that WAY needed, and the technology was so new, most radio guys didn't have it.

After four months, my work permit had stalled in paperwork and Bob suggested we forget the job. I remember him phoning to say, "I can't wait any longer - I need you here now."  I saw my dream job slipping away so I found an immigration attorney, paid the bill myself and she sealed the deal in less than 10 days! (I got in on the NAFTA agreement.)

I arrived at WAY-FM, greeted by Bob at the airport. A couple of days later it was Canada Day, and as it was not a national holiday, I worked a normal day. Bob and the American staff knew nothing about our national holiday. Haha!  On July 4, my new friend and Promotions Coordinator Tim Cardascia, and Bob and the staff all sat on the rooftop of WAY-FM in Brentwood and watched the 4th of July fireworks.

I could write (another) book about the experience in Nashville and WAY. So many great memories - new friends with real southern hospitality, a great house, meeting rock stars (and befriending a couple) and two fabulous, safe schools for our kids. But the most significant experience of all was being in the process of Sharathon and learning how to work in a listener supported radio station.

What?!  Listeners GIVE MONEY to a radio station? Yes...because the format means so much to them.  Christian radio is more than music. It is a lifestyle format, with songs that remind them that God loves them and Jesus died for them. I knew that if a station like WAY existed in Canada, the results would be the same.

There are many lame Christian stations in the U.S. that sound a bit worse than college (and many in Canada still do), but WAY-FM was the contemporary model that other stations aspired to.

I never quite got adjusted to seeing rock stars everywhere. I remember pumping gas in Brentwood and at the next pump was Michael Tait. "Hey Mike...!"  I thought - man this is weird!

Had I not worked at WAY-FM I would not have been inspired to start LIFE.  Had I not been fired, I would not have returned to Canada, period. I learned what I needed to know. I never would have believed that God could bring me something I could love more, than my dream job at WAY-FM.

A couple of years after leaving, Bob and I reconnected and to this day stay in touch. There are no hard feelings. Bob knows he planted a seed that has bloomed big-time in Canada.  Dusty from West Palm Beach and I stay in touch quite often. My best American friend Tim Cardascia and I chat monthly. WAY was a dream job that led to something bigger.

As I reflect on my first day at WAY-FM, 20 years ago this week, I wonder - what are the chances of a Canadian guy getting a work permit in the first place? And little me, showing the Americans how to do Christian radio in 1996? 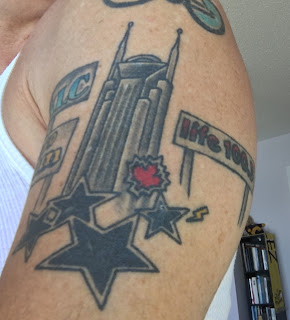 To cherish the memory and honour the past, last year, I got a tattoo of "the batman building" in downtown Nashville on my left arm. The memories remain - fabulous!

If you visit LIFE 100.3 in Barrie, we built a lunch room, that is named "The WAY Café" as a tribute to the station that inspired me.

My journey here. (scroll down to WAY)

Posted by Scott Jackson at 9:08 AM No comments:

A short vacation to The Big Apple - primarily to see the "Happy Together 2016 Tour". Yes, an oldies show. It wasn't enough that Chuck Negron from Three Dog Night was on the bill. I mean, that was plenty to make the trip worthwhile, but Mark Lindsay from Paul Revere and the Raiders was also on the bill!  A double blessing!﻿
﻿﻿﻿
But wait, there's more!  The Turtles were there, plus Gary Puckett and the Cowsills!  What a killer line-up!

I love Mark Lindsay's vocal snarl! I never realized that the Raiders' songs in the 60's had a bit of a punk attitude. (More about punk below) "Good Thing" and "Steppin' Out" sounded awesome. The Raiders are one of my favourite 60's acts.

﻿
The Cowsills - I wouldn't have travelled to see them specifically, but they were fabulous! Although the lead singer Billy Cowsill died a few years ago, his two brothers and sister filled it out. "The Rain, The Park and Other Things" (aka "I love the flower girl") was amazing! But their last song "Hair" was brilliant. I never realized how many parts there were to the song!
﻿﻿﻿
The Turtles were exciting and fun. Howard Kaylan had enough fire for the entire show. He did more than sing - he hosted. His musical partner Mark Volman seemed reserved and off-mic, and when he spoke his voice was terribly strained. ﻿
﻿﻿﻿﻿ Then he started to give a message and, knowing what it's like to be on stage with laryngitis I felt awful for him. Then he mentioned cancer, and that he didn't think he would be healthy enough to tour. But he's doing well and it was very transparent of him to share his struggle with so many 50-plus in the audience. Very touching.

Gary Puckett sang "Lady Willpower" - his biggest hit. I didn't like him singing behind the beat on every phrase. It was actually annoying, but the rest of his set was perfect. The big surprise was at the end when he said, "All the glory goes to God." Nice. (I later read up on his conversion to Christianity.)

The best was saved for last - Chuck Negron. The one-third singer of Three Dog Night still has the vocal chops. "Joy To The World" may be the best known song, but "Eli's Coming" is the song where Chuck cut loose and showed us what he's made of. (I did notice his walking was a bit stiff- probably lower back.)﻿
﻿﻿
The show was great. And the fact that the Rolling Stones concert movie "Shine A Light" was filmed at the Beacon Theatre made it more fun!

A side trip to the original site of the punk nightclub CBGB's was the real highlight. The club is now an upscale expensive men's clothing store but the owner kept the original nightclub graffiti-poster-spray painted walls as a tribute to the location it now sits on.

In the foyer is EVERYTHING musical. Stereos, amps, signed posters....a total CBGB museum  Concert photos of the Ramones were everywhere. It was better than I had hoped. It is a shrine for any punk fan, plus...the stylin' clothes!

It was (for me) overwhelming!  I actually cried in the realization of where I was standing and the history that I stood upon and how the owner paid homage with such taste. I'll embarrass myself and tell you, after I was in the door six feet, I was bawling so bad I had to stand on the sidewalk and compose myself. Then I went back in and was choked up for the next 20 minutes.

I said to my wife, "Isn't it weird for someone to become emotional over a punk club that doesn't even exist?"  She nodded yes in bewilderment. Then, I bought a shirt.

I tend to research everything before I go, or watch or listen - whatever. I had high expectations that this new clothing store would still honour the past and it far exceeded my expectations! Far!﻿
﻿
For a Christian music guy, I guess I surprise myself as to how much I know about the mainstream punk days. I love punk and the excitement of the audience. The sweat. The wrecklessness. The original owner Hilly Kristal was a true visionary, and passionate promoter and an entrepreneur - I love all of that.  He has a place in music history.

﻿ Then we hit up Times Square. For the middle of the day, in non-tourist season, it was incredibly packed. Business people, gym rats, weirdos, old, young, youth groups, and mostly visitors from outside North America. Massive digital signs took the place of static billboards so everywhere you looked the scene was changing. ﻿
﻿﻿

Posted by Scott Jackson at 6:23 AM No comments: