As a Christian, I drift. I go thru periods of time when I’m not feeling God is near me and I’m bummed out. And other times I think I’m going to explode with gratefulness. Maybe that’s a "spiritual ADD" thing!

Certain people are like a battery charge for me. There’s a few. Two of them I've been hanging out with over the last two days so I’ll mention them by name.

Pastor Wayne Lucas at Alliston Pentecostal Church, where I used to attend.  Despite the stupid things I’ve said to people or bad things I’ve thought, when I’m with Wayne, he makes me believe that holiness is possible. It’s nothing deliberate that he says to me. It’s not counselling. Just being with him seems to wash away my junk and excite me about going deeper.

Last night I hung out with a new friend - Bob Cox. He’s the manager of a Christian radio station and he booked my band for a show recently. Just through dinner and conversation I felt renewed. We covered a multitude of non Christian topics and each topic is reasoned through the filter of being a Christian.

I will mention one more. John Bevere - a national evangelist. We’re watching his video series in our staff meetings. His fervour for the Lord is contagious and his teaching is backed up with dozens of Bible verses on the screen. I feel wiser and stronger having watched the video series.

Not all Christians make me feel that way. With some, a discussion of faith doesn’t even come up, even though that’s (supposedly) the core of our lives. They don’t encourage me in my faith and they like to point out "what’s wrong" with something I said, or posted, or did.

Wayne and Bob make me want to chase after God kind of like my dog chases after a tennis ball! With excitement and speed! They don’t talk down to me. They build me up.

I’m grateful to those people who help me return to path I want to be on. That’s how I want to live my life.
Posted by Scott Jackson at 11:40 AM 1 comment:

It's been a few years since I attended the Dove Awards in Nashville. So great to be there this year!

This year's awards was held at Lipscomb University's arena. The staging was big. The lighting was great. And everyone was dressed up for a classy night out. 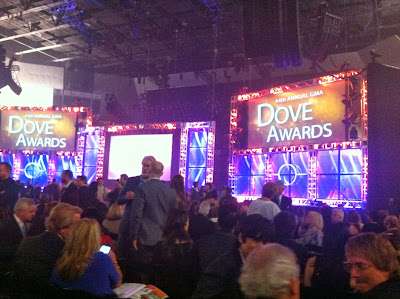 For the first time in 30 years, the Gospel Music Association did not award to Male Vocalist, Female Vocalist and Group of the Year.  I'm not sure why.  But who wins the awards isn't important to me - I really enjoy hearing the heart of the artist through their acceptance speech. Often you get a glimpse into what makes them tick.

So awesome to see the Newsboys, Amy Grant and Michael W. Smith all perform at the same event! What I want to know is how the stage crew can move a full band set onto the stage for one song, nail the music mix, drag it off and change the set in just a few minutes. Amazing!

TobyMac opened the show with his 10-member Diverse City band. An exhilarating three minutes to launch the show!  At 48, he's still got it!  Lecrae won for Hip Hop/Rap Song of the Year "Tell The World" - click for his acceptance speech.

Amy Grant and Kirk Franklin were the show hosts. She took off her high heels so she could be on the same level as Kirk, who is really short, but even without the shoes she towered over him. Amy mentioned several times that she couldn't clearly read the teleprompter - which of course made the entire audience turn around to follow along!

Click here for the winning artists.
Posted by Scott Jackson at 12:50 PM No comments:

This is SO cute!


Posted by Scott Jackson at 8:41 AM No comments: 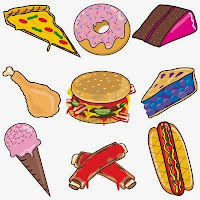 She's out of town for five days, but before she left, she prepared a couple of tuna sandwiches for me. Yeah!

Dinner. Hmmm....?  Let's see what my life has on hand. Other than a couple of Joe Louis and some horrible green vegtables, the fridge is kinda empty!

Posted by Scott Jackson at 7:03 PM No comments: