For the last few months I’ve been hooked on Judge Judy’s court show. 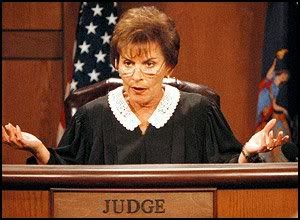 Before I’d become a fan, I thought the show was a parody or gossipy. I guess I wasn’t sure - so I assumed. The show is about real people going to small claims court. Most of the cases deal with unpaid rent, or loans not paid back.

The plaintiff is interesting because sometimes it is a mom suing a son, or a daughter suing a father. It makes me wonder about their family dynamics that they could actually sue each other.

The defense is more interesting because usually they are in denial about fulfilling their agreement to pay back the other person. Often the defendant is being sued for non-payback of bail - to get them out of jail. So, the plaintiff was kind enough to lend them $1,000 for bail and the defendant says "I didn’t ask for it, it was a gift." Right. You’d rather be in jail?

Now the most interesting thing. Nearly everyone on the show (except Judy) cannot answer the question without going off on a tangent. So, Judy will ask, "Tell me what month did he give you the loan" and they’ll answer, "Ok, so, like, we met five years ago..." Judy says, "what month?!" And this goes on for most of the show.

I’ve noticed this in real life. People don’t answer the question. People want to give information that doesn’t even pertain to the topic. I guess people like to talk about themselves.

The show has made me more direct in conversation. Just shut up and answer the question.

Other answers from Judy:
"Don't say basically. Basically is a filler word".
"Hurry up and answer, we're having sushi for lunch"
"If it doesn't make sense it's probably not true".
"You ate the steak, you pay for it".

Posted by Scott Jackson at 12:12 PM No comments: 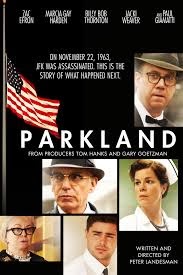 I rented the movie "Parkland" last night. It's the hospital that tended to the assassination of President Kennedy.

I loved this movie. It bombed at the box office - they lost millions of dollars. I don't know why.

Producers did a great job of blending the actual Dallas footage with the actors. The actress playing Jackie Kennedy had very few speaking lines, if any, but I could feel her anguish with her dying husband in her lap.

The guy who plays Oswald looks exactly like him.

There's a side plot about the character of Abraham Zapruder, who captured the assassination on Super 8, played by Paul Giamatti.  It was very heartfelt. Especially the aftermath.

Zac Efron played a minor role as the attending physician and pulls it off.

The movie is rated PG. If you're squeamish, the scenes in the ER are pretty bloody, but you never seen Kennedy's head and I didn't find it gory, perhaps because I knew what to expect.

After the movie, I found myself watch the original footage on You Tube and checking Wikipedia for the characters in the film.

http://youtu.be/9yjUAnMyCus
Posted by Scott Jackson at 1:51 PM No comments:

When a new year begins, we look at it with optimism, telling our friends that we hope it will be a better year than the one we just finished. As if the previous year, brought was joyless, which, despite some junk, there were plenty of joyous events. 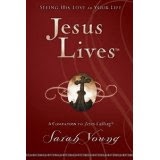 Many of my friends say making new year’s resolutions is stupid because they will break them anyway.

So how will 2014 be so wonderful when you have no plans for betterment? If 2013 was so terrible, wouldn’t it make sense to resolve to make plans? I think so.

So what and who cares if you break your resolution. Start again. You don’t have to wait a year to start over.

To start 2014 I've begun reading a new devotional by Sarah Young called "Jesus Lives". It’s a lot like "Jesus Calling", and I enjoyed that, so this should work well for me. I suppose it’s a got the "puppies and rainbows" outlook, and generally I need more than that, but right now it seems there is enough strife in my life, that maybe the over-positive reading will balance it out.
Posted by Scott Jackson at 12:32 PM