WHY I'M A CHRISTIAN

This blog is for my non-Christian friends who are agnostic or atheist, I thought I would share my reasons for believing in God and calling myself a Christian. 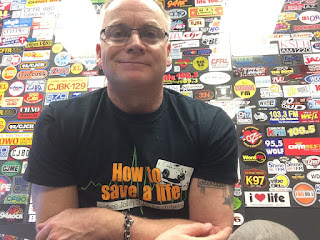 Here's why I became and Christian.

I did not grow up a Christian. I always believe in God but I never thought much about him, other than when my parents said grace before dinner.

Once in a while I thought about God, like because the sun rose every day and it's not humanly made. Something made it. Must be God.

Just like when I cut my finger and a scab grows and then it heals with no marks. And when I drop something, it always falls to the ground, not sideways or up and down. No one can explain why these things do what they do, but we trust and hope that the sun will rise tomorrow like it's supposed to and that a scab will grow and that stuff keeps falling down, not up. We just trust.

I didn't get married in a church. I didn't think had anything to do with marrage. I could do it without him. And I did, at the Holiday Inn in Toronto.

Through my 20's I was happy. I wasn't hooked on drugs, I barely drank, my marriage was good. I owned a house, had a dog, wife and daughter.  My career was going good. I had a small celebrity status at CKLC in Kingston. Life was good. God was not in it.

After a couple of radio moves I ended up in Pembroke and I was working in secular radio. Still, everything was good.

Our seven year old daughter Crystal found something to do on a Wednesday night with a friend - they went to a kids program in a church. She was on a team and one of the ways her team could score points was to memorize Bible verses, which she was very good at. And if she brought a friend to church.

Crystal saw Janice and I as two points so she took us to church!

It wasn't creepy or boring. At church we found friends our age,and there was something different about them and we found out it was because they were Christians and there was a lifestyle change.  They were kind, didn't swear, always encouraging, and went out of their way to be nice.  We liked that, and wanted to be the same.

I didn't decide to be a Christian as a last resort, because as I said, everything was good. I had control over most aspects of my life. But still, my new friends were talking about God like he was a friend. I mean, they really knew what they believed.

We were asked if we believed in a historical guy named Jesus. They said, 2,000 years ago he taught about God to anyone who wanted to listen. Then, when he was the age of 33, a group of angry people didn't like what he stood for and the politicians felt threatened by him so they killed him on a cross. (Sounds familiar, doesn't it?!)  Then, after three days of being stone cold dead, he rose.

But he came back to life after three days?  Come on!

I already believed that the sunrise and finger scab were creations by God, so why not?  There were 500 people who saw Jesus face to face after he was dead, so it's a historical fact. So ok - I'll believe that.

It was a step of faith. I can't prove the Jesus deal.

Then I was told two basic Christian benefits:
I thought everyone went to heaven unless they were really bad people like a murderer. But who decides who is so bad they don't go to heaven?  Really, even murderers do good things, so where's the line?

I was told that God draws the line. Heaven is his house. He decides who gets in. We don't get in because we think we're nice people. We have to believe it.

When Jesus died, he took all of the badness with him. And if I believed that my badness was taken by him too, he would forgive all my junk, and when I die, I would go to heaven with him.

I chose to believe it.

My pastor asked me if I wanted to be a Christian. I said 'ya'. So did Janice. I didn't know what to pray so my pastor prayed and asked me to repeat it. It went something like this.

"God, I want you in my life. I'm sorry for all the bad stuff I've done. Thank you for loving me so much that you died for me. I accept your forgiveness. Help me be like you." That was it. That's what I said to be a Christian.

Even after I was a Christian I didn't want to hear about God in music. Mostly I loved the Rolling Stones and Christian music was probably all junk. Two years later, I listened to a Christian song by Geoff Moore. It was pretty good.

One day I was in the car with my Rolling Stones cassette and my new (Christian) Geoff Moore cassette. Was I crazy? I chose the Geoff Moore album over the Stones and I remember thinking, "God what are you doing to me?" (Holy Spirit guiding me.)

I was hooked. The music was equally professional but the words to the songs were encouraging me in my faith. They reminded me that God is real. Since being a Christian was more than a religion but was changing my life, I fell in love with Christian music.

Other stuff changed. My movie choices, my choice of friends, how I treated my wife, how I worked for my boss. I just decided that if I put God's choices before mine, he was would be happy. And because of that, I was happier!

Being a Christian affects everything I see and do.  What movies I watch, who I hang out with, how I feel about homosexuality and abortion and weed and many other topics that have become controversial.

So, my non-Christian friends. That's my story. Christianity is not a religion I've made up or I follow because it makes sense. It's a step of faith.

You make your decision.

Posted by Scott Jackson at 7:49 AM No comments:

When I was living in Nashville, I ran into Steve Taylor, backstage at the Newsboys show.  (Hey, it's Nashville - stuff like that happens all the time.) 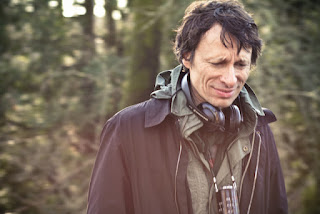 We made a plan to have breakfast the following week. Steve's favourite restaurant is The Pancake Pantry - it was him and me, just the two of us for about 90 minutes. We talked about music, God, family, everything.
Because of his deep, thoughtful, intense and witty lyrics, I thought he must have known something about God, that I didn't and I wanted to know his secret.
I asked him about his Bible study with friends - "Do you do anything every week? Meet with people?"  He said, no.
I asked - "What do you read in your personal quiet time - a devotional of some kind?"  He said, no.
I mentioned one particular song of his that meant a lot to me - "The Finish Line" and he said, "Hmmm...ya. I think I got it right on that one".  That was cool. Most artists would say, "You know, if I could do it again, I would have changed a line, or a guitar part."  But, Steve was pleased with that one song. The song that accelerated my walk with Christ.
After breakfast as I got in my car and reflected on this once-in-a-lifetime moment with a rock star, I felt disappointment - he doesn't do a Bible Study or a men's group or read a devotional. How is it that Steve is SO connected with God - so much more than me. I wanted a piece of that. I didn't get it.
Then, as I was about halfway home, I got it.
Steve is a songwriter - he's amazing.  God has given him the gift to write songs and express the himself with clever words. I cannot do that.  I am a radio guy. He probably doesn't know how to program a radio station - that's my gift.
More so, he is trying to find his way just like I am. Both of us seeking God using the gifts he's given to us.
I figured it out. Breakfast mission successful!
And, by the way, when I was in the early of preparation for to start LIFE 100.3 and I was fundraising, Steve was the only Nashville rock star of those I approached, who made a donation.
December 9 - happy birthday, Steve!
Posted by Scott Jackson at 6:05 AM No comments: