Last March, I was moving a table - the glass top slid off like a guillotine and smashed down on my right foot. Crap, did it hurt!

I took off my sock and there was blood on my big toe. I felt faint. I sat down. Staff came to my aid, iced my foot and sent me to hospital to get checked. Sure enough, my toe was busted. Never in my life have I broken a bone, til now.

"You're gonna lose the nail", everyone said. Fine.

For two months I felt the pain as I walked, and as I biked I bit my lip and took advil. Then by May, the pain was gone, but not the nail.

It is now the end of June and the nail is an off-slime-green, most of it still hanging on. I think I'm setting a record for a dead nail. 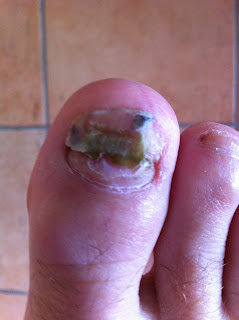 Posted by Scott Jackson at 11:06 AM No comments:

Having watched Judge Judy regularly, here is what I've learned - most people seem unable to answer the questions without getting off track.  They ramble. They want to embellish the answer to a question that only required a "yes or no" answer.

I see this in real life.  Do your friends do that to you?  Do you do that as well?

I guess I see myself doing this. Instead of answering a direct question, I probably want to give some background to my answer.

Yes or no. Just answer the question and spare us all the drama that isn't relevant.

Watch the edits of cases 4 and 5. Wild!
Posted by Scott Jackson at 9:05 AM No comments:

THE DAY MY DOCK WASHED AWAY

The wind blowing across Lake Simcoe was strong. The waves were not over the dock, so I would estimate at about 18 inches. 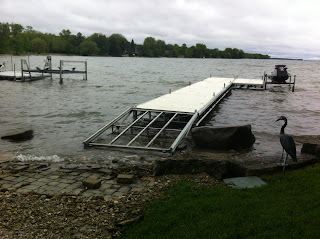 While visiting Toronto, my neighbour phoned to tell my dock has been washed off the base and was stuck under HIS dock - and the waves were five feet high.  Five feet high?  Really?!

I got home and sure enough an entire top section of my dock was missing, a quarter of it retrievable, and the rest - vanished into the bowels of Lake Simcoe.

The stone path from the patio to the water was also somewhat washed away.

Living on the water has a whole new set of issues.

I'm not much of a Bible scholar. I like reading books that explain Bible stories in a 21 century way of thinking, flushing out the religious blabber. (I think it's called Christianese.)  Reading the Bible is often hard for me, probably because of the weird names of people and places and for some reason my mind glosses over as I dream about bikes and seadoos.

Jesus For President is fairly political, and that is definitely not my interest. But between the political references there is a lot of exploration, whereby I feel myself nodding "Ya, that's it, I agree".

Like, I didn't fully consider "manna from the sky" until the author explains it as God saying, "Don't take extra; there will be enough" and when Israelites hoarded extra, God sent maggots to destroy it.

The story of David killing Goliath with a stone and slingshot is a bit like the idea of killing Bin Laden with a super-soaker.  Impossible, but that's what David did.

Or, the stuttering prophet to be the voice of God. Or a barren old lady to became the mother of a nation. Or the homeless boy who would lead the people home. Or the shepherd boy who would be king is like picking a kid from the sweatshop to run a corporation. Interesting concepts.

Perhaps my favourite line so far (because I'm only halfway thru) is this:  "We in the church are schizophrenic: we want to be good Christians, but deep down we trust that only the power of the state and its militaries and markets can really make a difference in the world."

More so, I love the packaging, written on faded pages, with ink notes in the margin and red circles around key thoughts. It's an already-read-book-with notes.

Posted by Scott Jackson at 1:17 PM No comments: