I'M GOING ON TOUR WITH HANDSOME AND GRETYL

I'm going on tour!  With Handsome and Gretyl!  HandG are my son Brett and his wife Gretyl, who live in Seattle.

Last December they released their new album "12", for which they recorded and released one song each month, concluding in December with the full CD, released at Hi Five in Seattle. I was there for the show and recorded their single "Let's Go" on my phone. Turned out pretty good!
﻿﻿﻿﻿﻿﻿﻿﻿
With two their two children in Seattle and the home recording studio where Brett is tracking, mixing and producing other artists, he and Gretyl haven't had a chance to tour for a couple of years but long at last they are hitting the road.

While the tour is a few months away, the prep is underway. Lots to do. Ordering new merch, preparing the 32-foot tour bus, talking to promoters and rehearsing. 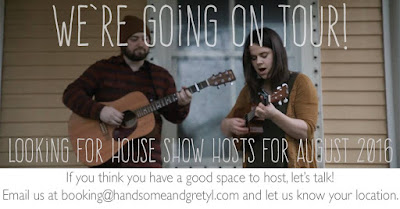 In Central Ontario, you can see them August 13 at "Rock The Lake" in Orillia at the Aqua Theatre. Jimmy Needham is headlining.

It'll be fun to put my Road Manager's hat back on and look after some of the tour details while my wife Janice will be the official Tour Nanny looking after our grandkids while Handsome and Gretyl are performing.
﻿

Sounds like a fun way to spend the summer! ﻿﻿ Not to mention it fulfills the showday withdrawl that I seem to be experiencing!

If you want to book Handsome and Gretyl  this summer, email - booking@handsomeandgretyl.com


Posted by Scott Jackson at 9:40 AM No comments:

AFT Guitarist Davey Hooper - "Scott captures some of our best memories over these past few years. So excited to have it all written down to look back on every now and then. Truly a page turner."

For the last month I have been promoting...well...flogging...a book that I wrote called "Herding Kittens."  This is my second book - the first one was "Good To Great - The Radio Version".

"Herding Kittens" is my story of the Christian pop/rock band Anthem For Today that I managed and book shows for. 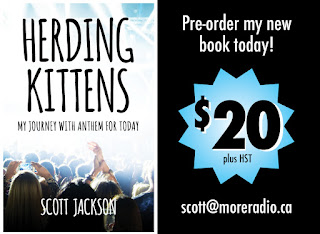 After each show for the last three years or so, I posted a report of the show with photos on facebook and I was wise enough to keep notes on file as well. I'm glad I did because memories of events tend to fade far too soon but with those notes, the details remain clear.

If you have never written a book, and you have a story you want to remember, this is a great way to memorialize your story.

I published "Herding Kittens" through Blurb. This is a self-publishing site. I didn't get a big million dollar advance. In fact, I got nothing but I will get a small profit from each book. I'm expecting to gross about $50 - if I'm lucky.

Steve Jones/Operations Manager LIFE 100.3 - “When we go to a concert, most of us only see what’s up on stage.  Scott takes us backstage to open up a world that we never get to see.  The booking of the show, working with promotors, the travel, hanging with the band, the on stage challenges, and of course the big show!  Get ready, these stories will keep you hooked from beginning to end.”

Through self-publishing I do all the work. My daughter Crystal assembled the chapters, then lined up all the pages as a PDF and my friend Gideon handled the cover art. From that, it's sent in and boom - in less than a week it cames back like a book. No upfront expense.

The only catch is there are no promo copies. I have to pay for every book.

Please understand that this is not a biography of the band, nor is it a "tell all" book. It's positive, with only good memories of the band and fun stories worth remembering. Buy it here.