Like, in the past, there's a friend who I upset and the guilt weighed on me until I decided to fix the relationship. But until I, my pride told me, "ah don't bother. They'll be ok, it's not worth it".

The Spirit tells me "ah ah - don't do that...!"  I feel the conviction of what's right and what's wrong but pride will discourage me to not do what's right. Dumb, I know.

The big one is when pride says "you deserve better."  Especially when it comes to a situation compared to someone else.

I was reading Proverbs 29:23 -  "a man’s pride will bring him low, but the humble in spirit will retain honour."

Pride holds me back. No more Mr. Pride Guy.
Posted by Scott Jackson at 9:57 AM No comments:

I am petrified of wind. When I see tornados on TV, devastating cities, leveling buildings and ripping apart family possessions, I tremble.

Last Friday there were warnings of tornados in Barrie. I felt the wind build as I locked down my patio furniture. As the sky darkened and the warnings continued, and funnel clouds were reported, panic swept through me.

Oh crap! What am I supposed to do?

"Take shelter in your basement", the reports said. 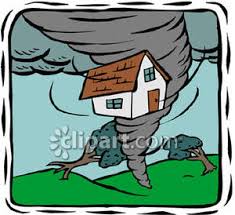 I envisioned the roof of my house blowing off - my bed flying up to the clouds, my photo albums blow to bits, my family video tapes wrecked, etc.

I actually grabbed my wallet, my car keys, my meds and my daytimer and sat and waited for the horror to pass, while everyone else in the house carried on without a care.  "Hmmm - what else should I take to the basement? My favourite CDs? Yikes - I have thousands, literally. My framed rock star photos I took and are some of my prize possessions. What about water and food?"

At that moment I realized how materialistic I was. While photo albums and family possessions cannot be replaced, it's just stuff, right? All that really matters is safety for my family. Everything else is insured.

Who's kidding who?!  Insurance doesn't replace treasures. If I lose my favourite things, I'm going to be ticked off, depressed and probably angry for a long time. Am I materialistic? I guess I am.

I hate wind. It scares the crap out of me.

Fortunately, all that was affected was electricity. And thankfully, my 10,000 watt generator gave me power to keep me comfortable while I fretted. I am so materialistic.
Posted by Scott Jackson at 10:04 PM 4 comments:

LET'S NOT DO THAT AGAIN!

Six months ago, me and our promotions manager (Jen Melanson) planned a double Air Raid and a double Heart of Worship - four concerts all within 10 days. Insane?  In hindsight - yes.

The Air Raid dates were selected on availability of bands, and then availability of venues. It's a back and forth conversation between everyone to find the right dates. Air Raid had never been in Owen Sound and we wanted our 90.1 listeners to be included in the Air Raid events. Huntsville has hosted Air Raid once before and it was a great success.
﻿﻿﻿ With the new Heart of Worship concert series, we planned a Peterborough show, having not done a show there before, and the second show in Barrie was packed out, as expected.

﻿ Going to Peterborough, Huntsville, Owen Sound and Barrie all in 10 days seemed like a great way to bring live music and station visibility to all the cities we reach. We actually thought, "ok, once you plan one concert, it's not much more work to do a second night". WRONG!

﻿﻿ It's twice the work. Twice the volunteers, twice the food, twice the travelling, twice the hotels, twice the potential for things to go wrong and let's not forget - twice the expense! But, we don't produce Air Raid shows for profit. In 22 Air Raids, we've found a small profit twice. So why bother?  Because it's ministry. Because it's a great event. It's fun. It's something to do that glorifies God. And it promotes Christian music artists who deserve the exposure. (The double Air Raid last week cost just under $10,000.)﻿﻿﻿

﻿
﻿﻿﻿﻿At each show we feed the bands and crew upon arrival, then cater a dinner according to their contract specifications, and then an after show snack. There are P.A. systems to rent and transport. Hotels to book. Soundchecks and merch booths, videographers and guest lists!  It's kinda like a small industry with a crew of 25 for Heart of Worship and about 35 for Air Raid!

With Jen Melanson on maternity leave (nice timing - thanks! Haha), Pip Lucas is filling in as Promotions Coordinator. He had been on the job three months, and had the pleasure and pressure of organizing these four shows.﻿﻿

Heart of Worship - a free concert.  In my heart I don't feel it's right to charge people admission to praise the Lord. Yes, it costs money to put on shows but I don't like passing a love offering if I can help it and thankfully two sponsors offset some of the cost - Music For Young Children and Lakeview Surgery Centre.

Thanks to all the bands who joined us for four exciting shows of music!

I LOVE THE RED AND WHITE

The excitement to proclaim "Happy Birthday Canada!" seems to grow each year! Which is of course awesome!

I don't think we have always felt the loyalty - the patriotism. Not like the other guys to the south. Why is that?  Canada has a giant roster of renowned people who are known internationally. Music, sports, newsmakers. A flood of famous names quickly come to mind.

How often have we said of ourselves, "We Canadians are a reserved group."  Hmmm, not during hockey games!  Or rock shows!  We're just as outgoing as the other guys.

Is it because "nothing happens up here?"  No - wait a minute. The other guys are coming to Canada to make movies, shooting in Toronto and Winnipeg and pretending it's a scene in New York. It's more affordable to film in Canada, so they come.

In the last two years I've become a fan of the changing seasons. Ten years ago, I lived only for summer and was disgruntled about the other three seasons, but now I look forward to the colours in the Fall, the glorious whitewash of winter and the optimism of Spring.

Seems to me there's a lot of great things about Canada.  And each year more people catch the vibe of Canada!