It does, smell! I'm talking about our water.

When I take a shower, it smells rotten. It's been getting worse. I took a water sample to the health unit and they said, "It's not drinkable".  Oh boy.

I remember at my parents' cottage there was a dead squirrel in the well. My dad had to shock the well.

So, we called the well guy to find the well and fix it. "There's no well". Of course there's a well - when I turn on the tap I get stinky water. He searched the property - no well.

He got his "well-finder-device". One of those goofy things people scour the beach with to find treasures. No luck.

He followed the pipes and electrical line and says, "It leads to the lake. Your water is coming up through the sprinkler system and you're getting lake water".  No, it's not lake water. The sprinkler system is removed from the lake in the winter and we still have running water. (This isn't good - I'm telling the expert well guy how it works.)

"Maybe you're siphoning off your neighbour."  That's possible. When our furnace died, it turned out to the "hot" - no make or model on the unit.

We called the Township office and who were kind enough to provide a Google Earth map, with a blue mark indicating all the wells on our street.  But guess who - no blue dot for us.

So, now it looks like we bought a house, that included a well, but it's no where to be found. "This is a lawsuit" says our real estate agent.  Oh boy.

We get another map from the "Ministry of Maps and Hidden Wells".  (or something like that)  They found our well!  "It's buried under the sidewalk!"  They dug up the sidewalk - and ta-da - a well.

Now all we have to do is - well, actually, I'm not sure. But I bet it's gonna stink.
Posted by Scott Jackson at 4:47 PM No comments:

A few weeks ago I was in a restaurant eating chicken fingers and I bit on something hard. Well, there's no bones in chicken fingers so I figured it was probably a crown or filling or bridge. Third guess. 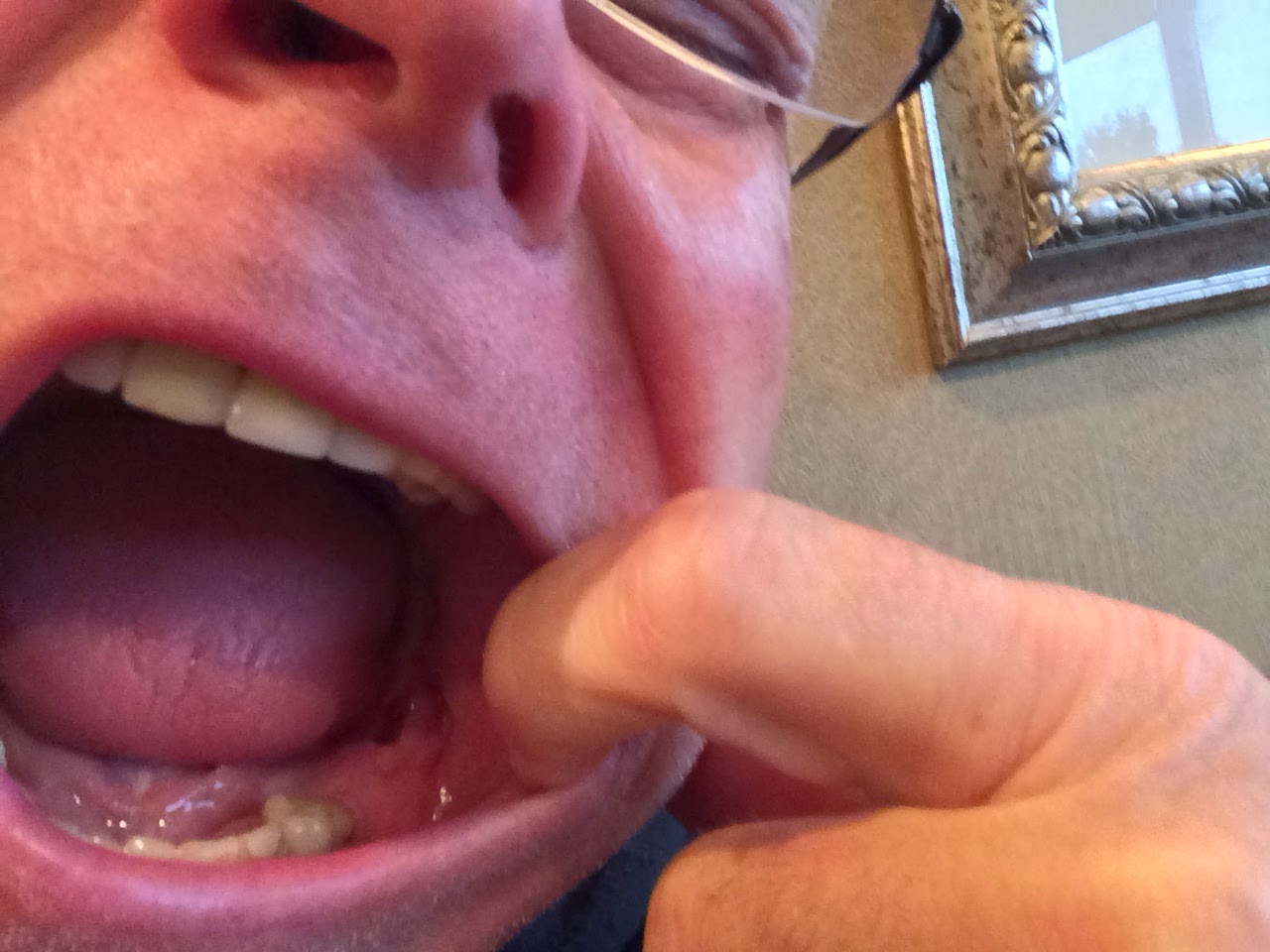 Thankfully my dentist took me on the next workday and scheduled an emergency extraction. Ouch!

The surgeon was awesome - from what I remember. The anesthetic was fabulous!

The next couple of days were not too pleasant with sore gums, not just in the extracted area, but my entire lower jaw. In fact, the motion of eating has been really painful, not to mention the absence of any molars. 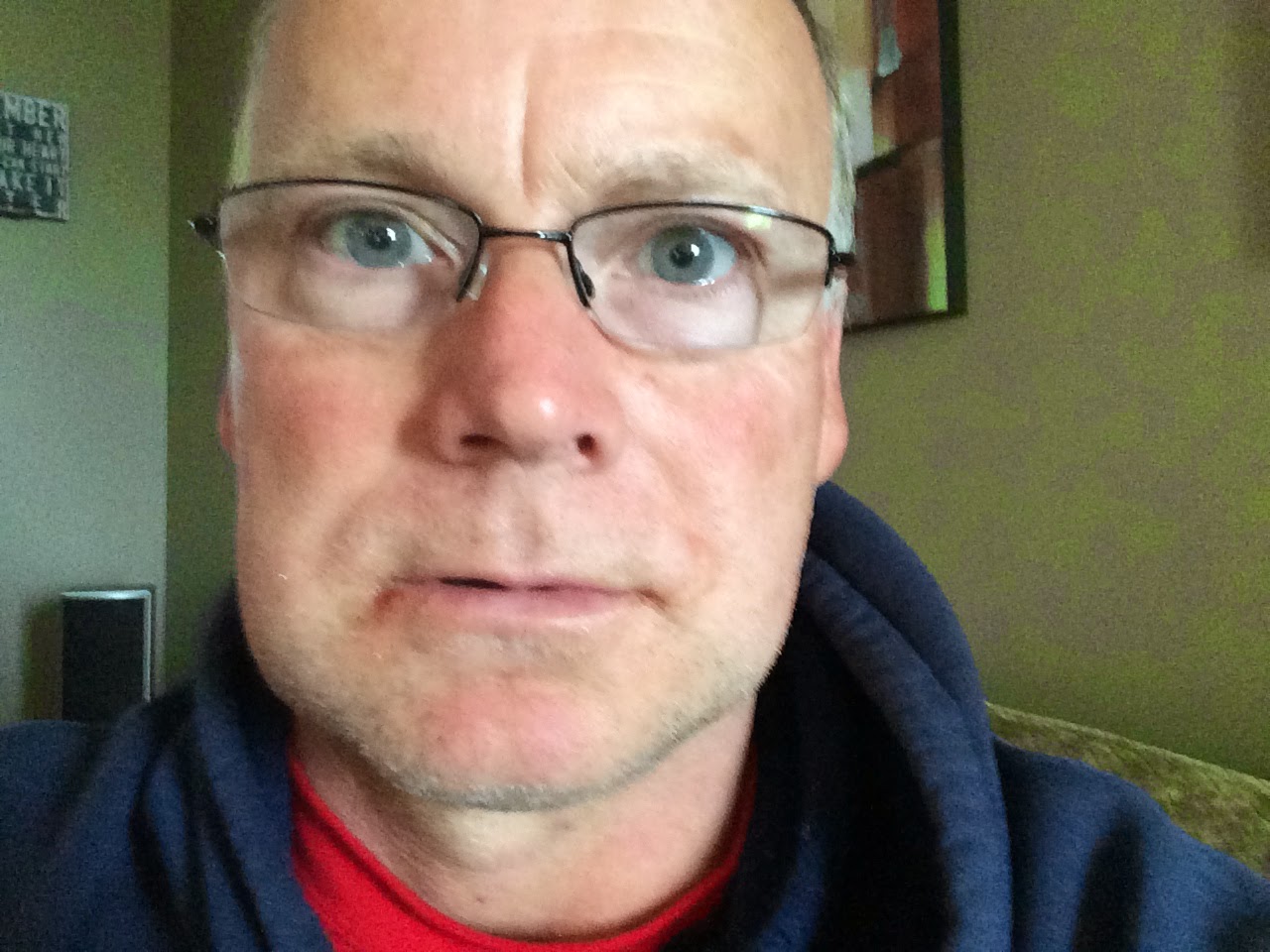 It's been 10 days since the extractions and I'm still on Advil.

Next step - wait four months for the bone to heal. Then get implants. People tell me they cost about $4,000 each. I need three. Zoinks!  Then, another four months to heal, then the bridge goes on.

So, in total I'll be without molars for about 8 months.

Posted by Scott Jackson at 8:57 AM No comments:

BEHIND THE SCENES WITH AFT #6 - THE CADILLAC LOUNGE

My first visit to the Cadillac Lounge on Queen Street in Toronto was a year ago, when I went to see The Blushing Brides (a Rolling Stones cover band). I knew the band from my Kingston days and it had been 25 years since I last saw them! So, getting a gig for AFT at the Cadillac had some appeal to me.
Upon arriving, I found out we were not playing on the main stage but on the patio stage at the back. The patio stage was actually bigger, but the real action is in the front of the club, not the back.

It was a gig that didn’t pay, but we thought would be good for our band resume, for a possible witness opportunity, and a chance to play just because that’s what we do.

Set-up was smooth. The P.A. and soundman were provided by the bar. The staff was super nice. The food was great. And, the washrooms were actually clean! 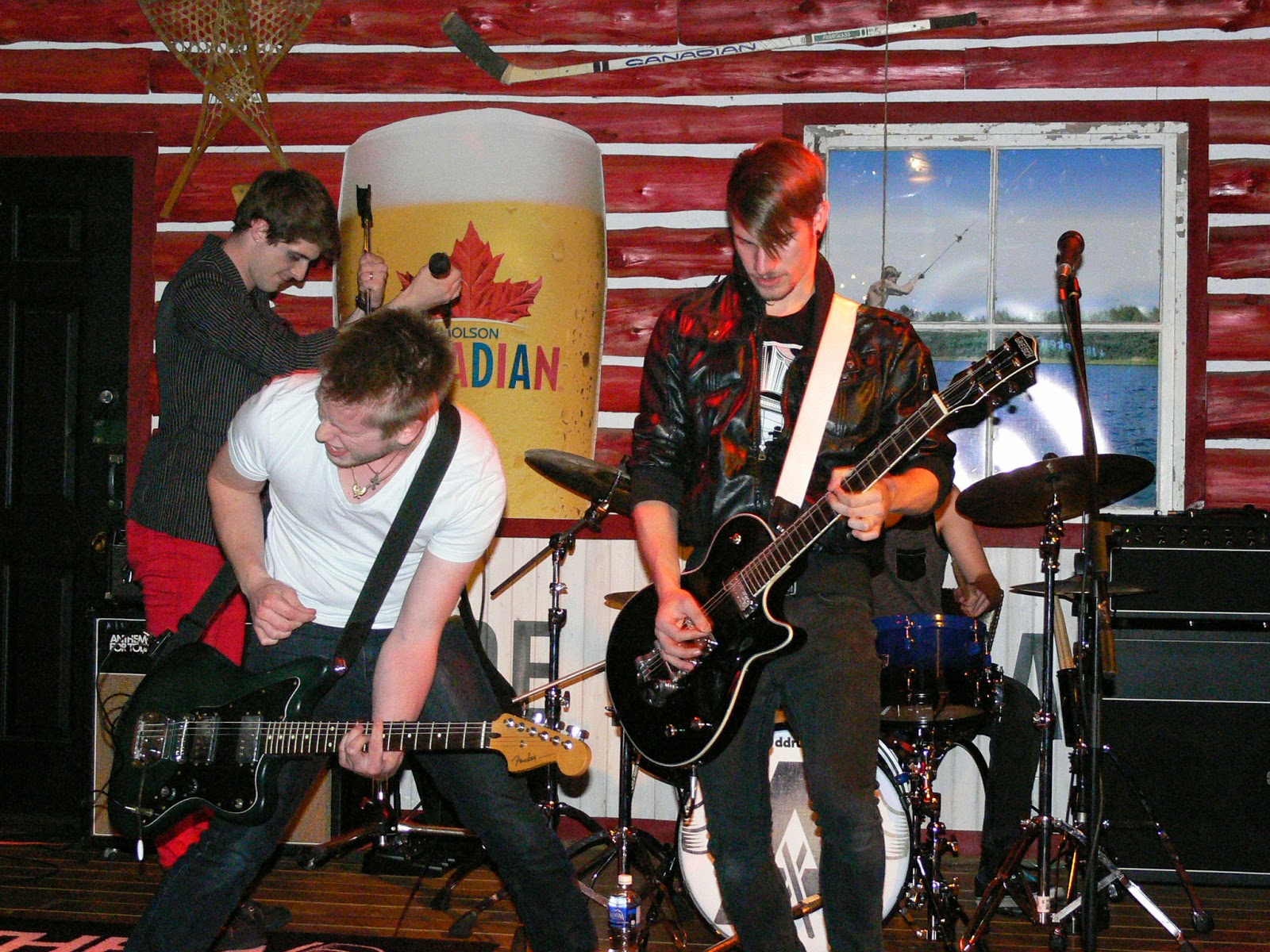 We blasted through our 35 minute set with not one technical issue. And I’m sure all 10 people in the audience loved it, including the band parents who made up half of the crowd.

We love playing for youth groups. And especially large youth conferences - that seems to be where Anthem For Today really shines. We have no desire to crossover into the mainstream - we know our audience is the church. But, we thought it would be fun to step into a mainstream venue, just for a night and maybe learn a few things. We didn’t. A great place for my buddies in the Blushing Brides but, seemingly, not our scene.

On deck - Saturday in Brampton for a church community picnic with 1,000 people! And next week London District Christian High School! 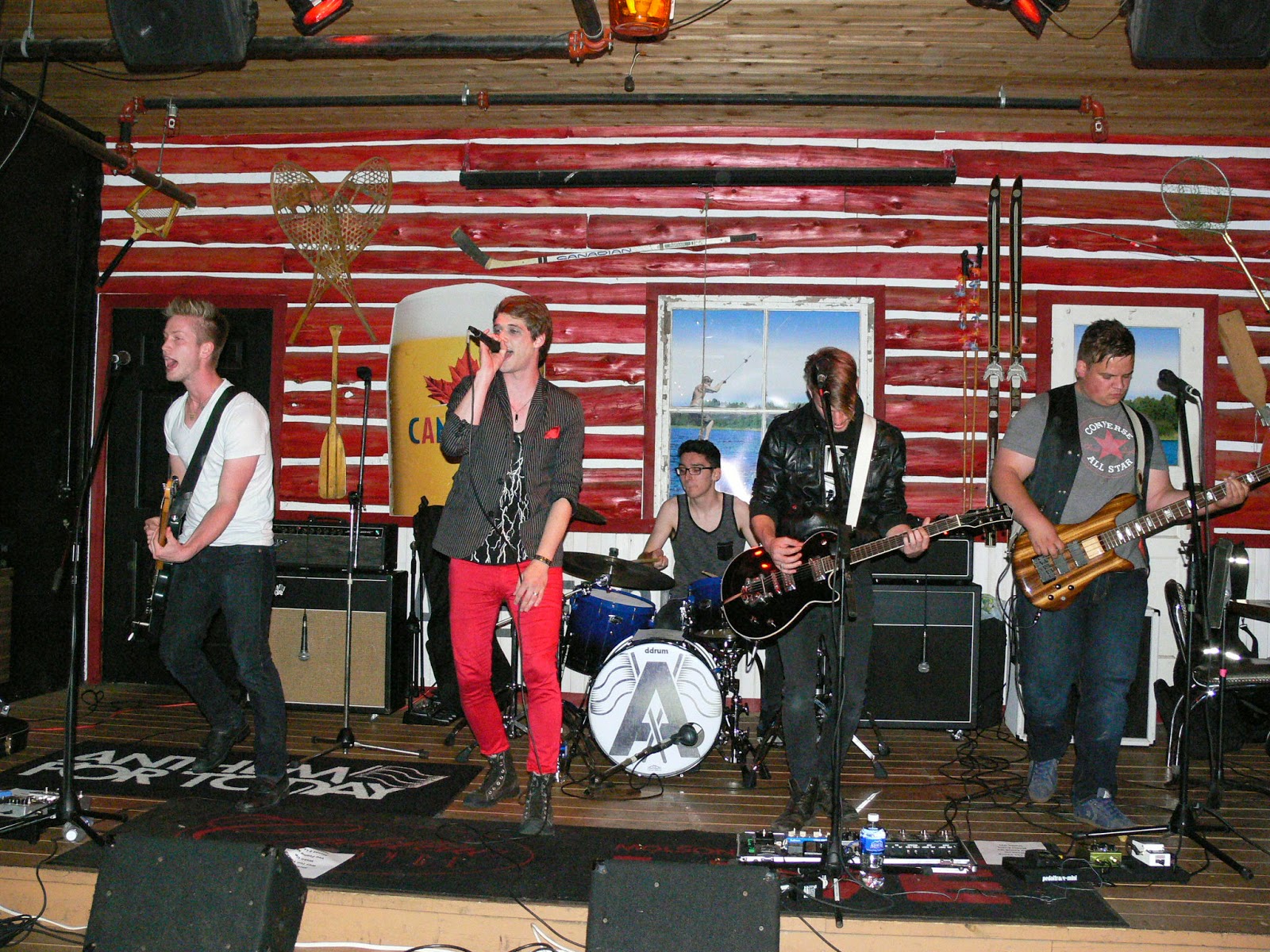 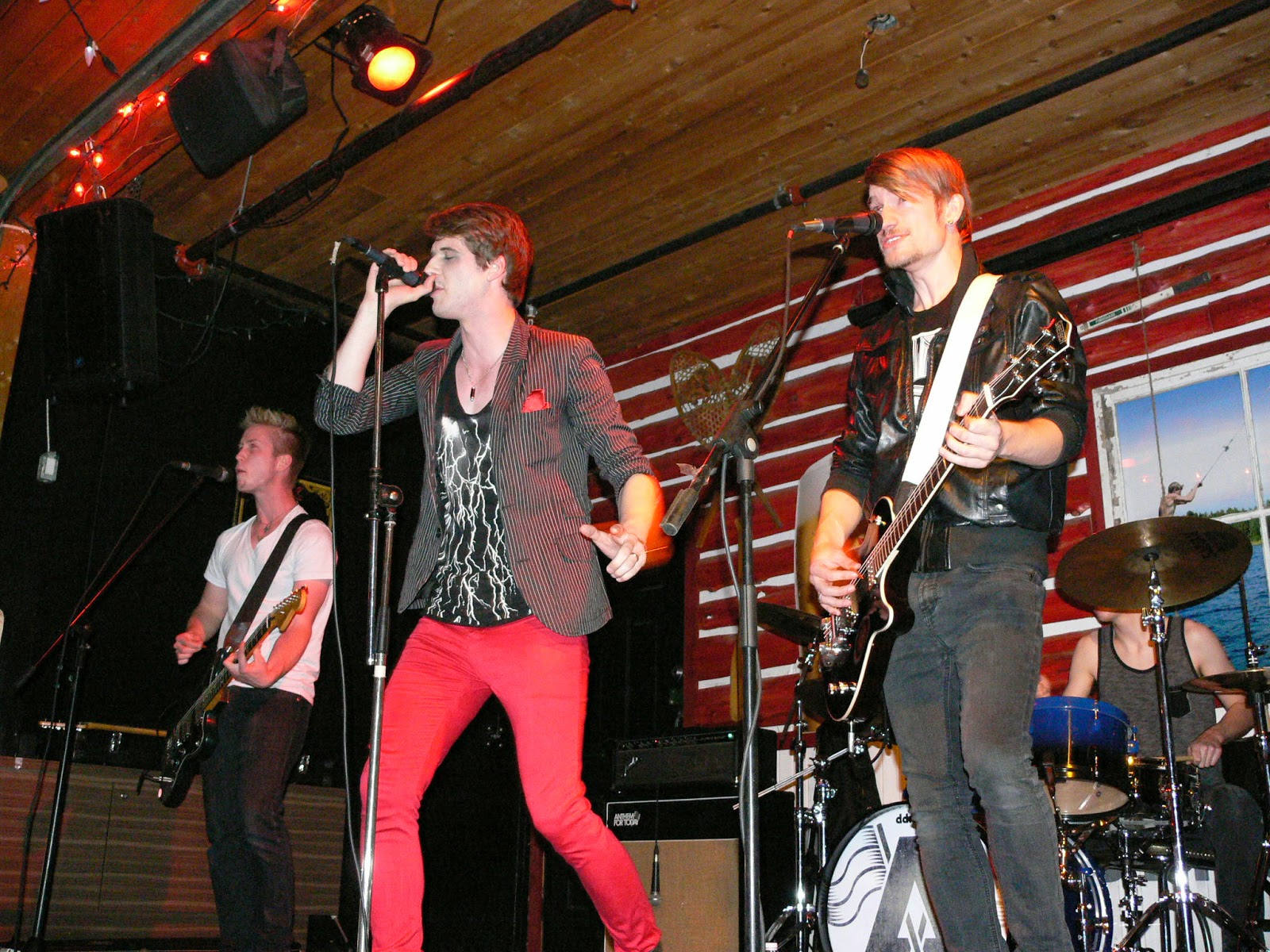 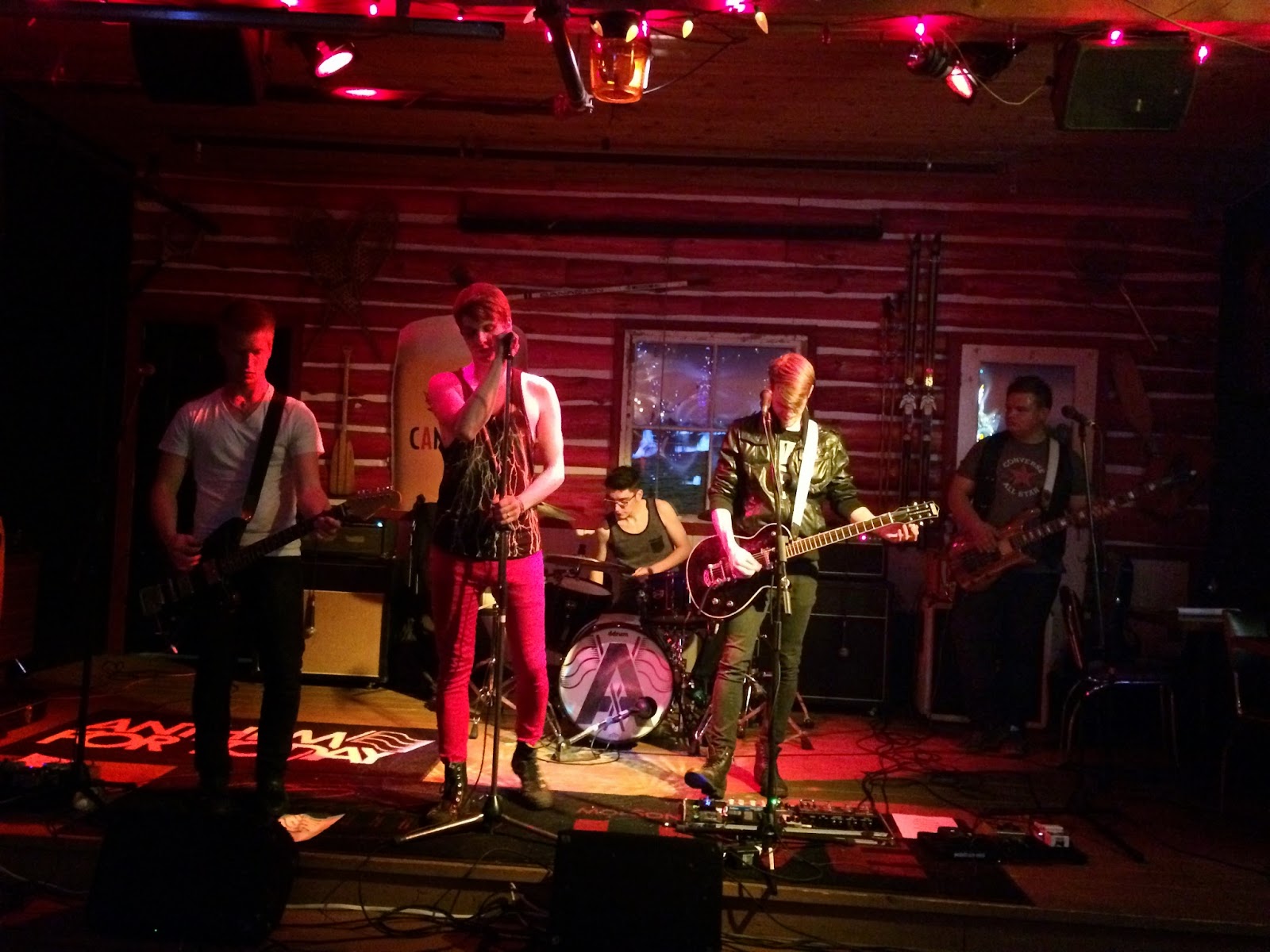 Posted by Scott Jackson at 1:59 PM No comments:

Ok, it's not ALL new, but a large part sure is!

The vision started with the creation of a Video Department. We began producing LIFE videos last year - videos to promote Air Raid, to summarize a Street Team event, a DJ devotion, to promote the All New Breakfast Club, or the Retro Show.  The plan was to make these LIFE "commercials" for playback at our church events and on facebook.

Once these videos were being produced on a regular basis, we decided that a "department" needs it's on office. And that's what triggered the renovations.

So, Suite 111 is looking pretty snappy. Soon, we'll be announcing our Open House and everyone is invited to stroll the new place.


Posted by Scott Jackson at 2:23 PM No comments: