There is a song by Group 1 Crew that I really love - "He Said". I love the melody, the hook and how the words fit into the melody. To me, it's a great song.

The song is written as if God is speaking to us, the listener. I like that. But lyrically, in my opinion, it's Biblically incorrect.  Here's why.  The words are -

"I won't give you more, more than you can take And I might let you bend, but I won't let you break And No-o-o-o-o, I'll never ever let you go-o-o-o-o"

Here is my line by line review.

"I won't give you more, more than you can take".  That's not true.  People get cancer and die. People have been murdered for their faith.  Dying is definitely more than we can take.

"And I might let you bend, but I won't let you break."  That's not in the Bible. Group 1 Crew (and many people) have confused that line with the actual Bible verse in 1 Corinthians (10:13) which says, "He will not let you be tempted beyond what you can bear. But when you are tempted, he will also provide a way out so that you can endure it."  So, the Bible verse is actually about temptation, not about God not letting us break.

It's interesting that people say to one another, "God won't give you more than you can handle". It's one of those things that's not in the Bible, but we think it is.

I still love the song - even though I know it's incorrect.

Our 15th anniversary for LIFE 100.3 is just around the corner. Back in 1999, the day we signed on the air, we had a friend video tape the actual launch in the studio. Having that video tape to watch now is so precious as it captures the moment, the excitement of what was to come. 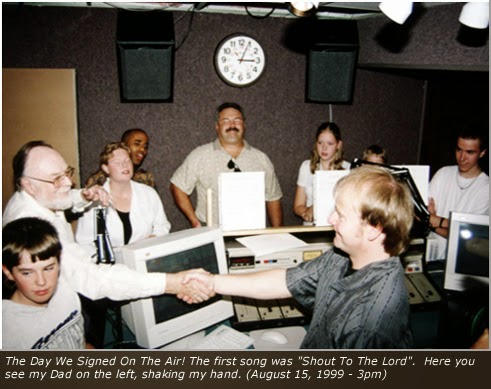 There was about a dozen people in the studio, mostly family. My wife Janice, our kids and my Dad, who passed away a couple of years ago. On the video tape and also captured in a photo, is the moment my dad shakes my hands, just seconds after sign on. My Dad wasn’t a believer, but he believed in me, and he watched the vision for Christian radio go from "an idea" to Sign-on.

I have a photo of him shaking my hand. He was so excited.

We never know who is connecting with Christ thru Christian radio, or how many people have experienced a life-change because of Christian music but we do know from listener feedback that LIFE 100.3 is making an impact.

Be sure to celebrate our 15th anniversary August 16th at Hi-way Church in Barrie.
Posted by Scott Jackson at 5:33 PM No comments:

When talking to friends about our kids, my wife and I are big advocates of talking-up our kids, as opposed to down.

I’m not sure where we heard this message, but the speaker made a huge impact on us.

So often, I hear people say mean things about their own kids. Like, "oh, we have a teenager, we all know what THAT’S like! - as if it’s a bad thing.

If it’s a bad thing, and you’re the parent, I guess we know who’s responsible!

But I hear it a lot - people running down their kids, who they supposedly love, and whom the kids are looking up to. Who would look up to a parent who said mean things about them?

I think comedians can get away with it, if it’s relevant and in fun. But I don’t like it when my friends say negative, demeaning things about their own kids.

The Bible even speaks directly to young people, "Don’t let anyone look down on you because you are young".

Instead of trashing your own kids, how about finding something you can brag about? Wouldn’t that bless them?
Posted by Scott Jackson at 8:50 AM 1 comment:

BEHIND THE SCENES #4 - THE RIDER & HOSPITALITY

As the Band Manager for Anthem For Today, I was asked to talk about "the rider".  The rider is the second part of the contract.  The contract states the date, location, time, and band fee. The rider has specific requirements for lighting, or meals, or in case of an overnight show - the number of beds needed.

I've been a concert promoter many times. And I've been a Band Manager with four different bands. I've been on both sides.

As the radio guy, I remember hanging out with Manic Drive, who were then known as One Cross, at a small church in Central Ontario. The pastor of the church treated them very poorly. He wanted his youth to have a great night with One Cross but he was - a cheapskate. He gave them a cluttered office for a change room, complained that he had to provide dinner and complained about paying them! (I think it was $150 at that time!)  I clearly remember thinking - "You expect them to be awesome and you're going of your way to be unhospitable."  And if you know the Cavallo boys - they're the nicest guys in Christian music. I learned a lesson that day - just be nice. They came a long way for $150.

Oh boy, bands drive a crazy distance to play shows and along they way, they gobble down a burger and fries. They get to the venue and set-up their sound and lights - with probably no help from the promoter. And because they're in an unfamiliar city, they don't know where the restaurants are or how long it may take to eat, so they eat at the venue so the show starts on time. At the end of it, they'll get paid a silly amount of money "to cover gas".
﻿

With Anthem For Today, we've done about 50 shows together and I think we've had three lousy meals in total. It's hard to eat an unhealthy meal and blow your socks off with a rockin' show! I recall a gig where we were served boiled hot dogs for dinner!  Ewoooh!  I took the boys out for a proper meal after.

Most Anthem For Today shows require us to bring our own sound and lights, and crew. And, we like that because we know our system, and our crew knows the lighting cues. But sometimes the promoter provides the production and crew. A couple of times the production was embarrassing and the crew was asleep, but other times we been blessed to have pro-crews light up the stage for us!

In 18 months of shows only one promoter bawked at our rider. And because the rider requirements are really about host hospitality, we knew that this promoter was not going to be welcoming. We passed on the show.
﻿﻿﻿

This reminds me of the story about Van Halen and the brown M&Ms?  Van Halen was famous for asking the promoter to have a bowl of M&Ms in their dressing room, but they wanted the brown ones removed. Why?  Because when the contract/rider was signed and returned to the band, they would know if the promoter actually read the contract.  It wasn't about the diva-request - it was about reading the fine print and getting the job done.

When the promoter is ready and everything is running on time, everyone can relax. We spend time backstage doing a devotion together, or chatting about our goals, or writing new songs.

﻿
Conversely, when you get a promoter who has worked with bands before, or better still, who has been in a band themselves, they take pride in their event and treat us like kings, and then everyone is happy!  The band and the promoter's team. You can feel God everywhere as both sides work to make the event awesome!
﻿﻿﻿
AFT has had dozens of great road experiences, working with visionary, enthusiastic, hospitable promoters. Our bad experiences are extremely minimal. I wonder - did God filter out the bad experiences because 99% of our showdates are FUN FUN FUN!  We've made great connections and friendships and gotten fabulous references.

We love doing shows!  When the audience gets to its feet and rocks out with us, you want to capture the moment, forever! Like when AFT played "Trouble" at Emmanuel!

So next time you book a band for your conference or youth group, remember - the band may be traveling a long way, with only a Big Mac in their tummies, ready to work long hours and perform for you.

Save the hot dog weiners for your puppy and show some hospitality to your guests. It isn't just expected - it's the polite thing.

A tight show comes from consistency. Like, the set list, for example. Me and the band put together the set list in a very specific order, and I guess my years as a radio programmer comes into play. The songs are lined up to flow from rock songs, to worship songs, to party songs, to acoustic songs, to the song G.I. sings lead on. And so on. 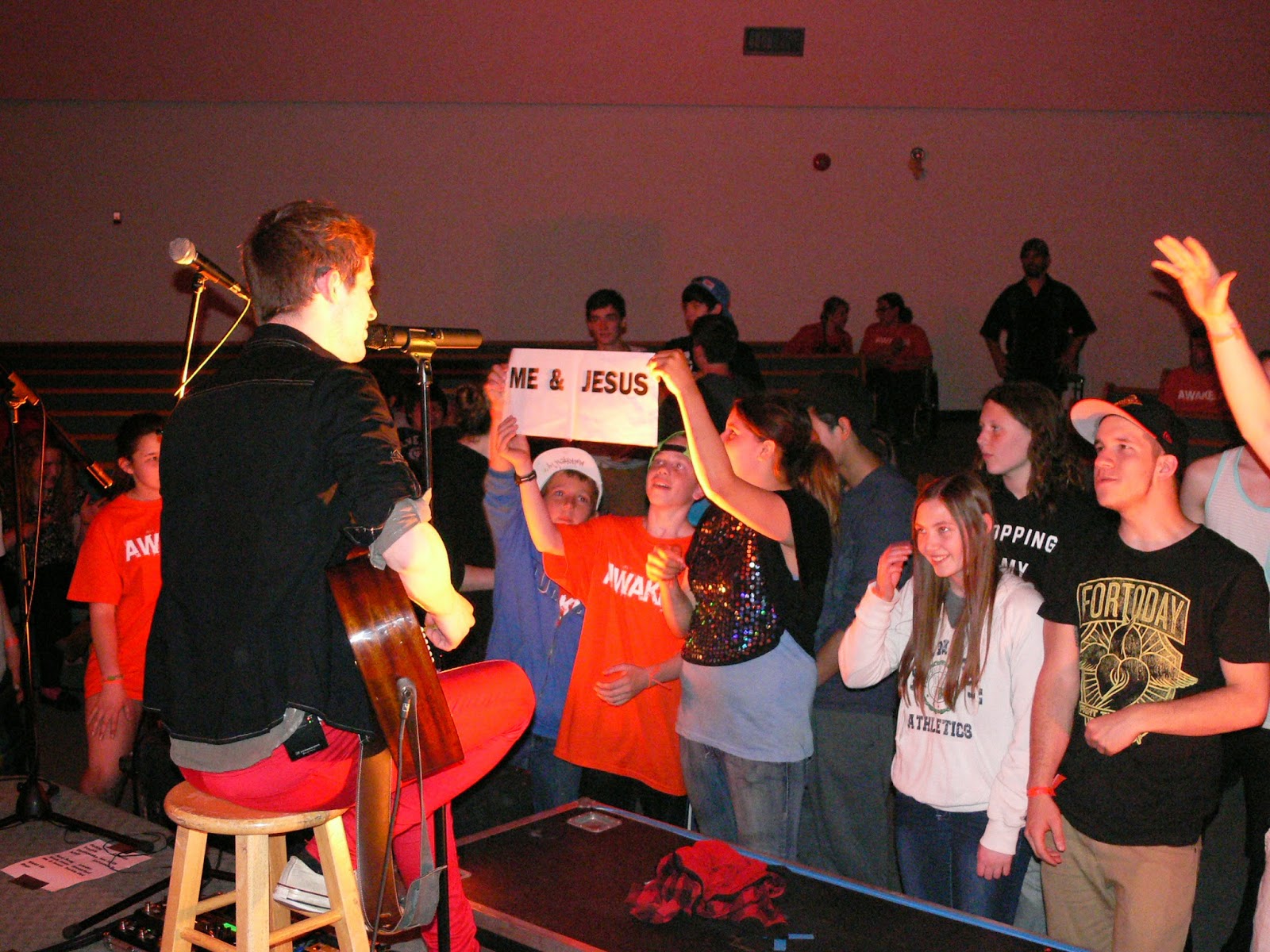 We played last year’s set list (that opens with "A Little Louder" for about 8 months, where it became not only incredibly tight but also incredibly familiar - like wearing your favourite t-shirt. It just feels right.

The new set list (which opens with "Falling Asleep At The Wheel") hit the stage in May. One of the changes was swapped out Pip’s solo song "Love Song For A Saviour" for "Me and Jesus".

The first time we played the new set was at Durham Christian High School. Pip launched into "Love Song",. The rest of the band was off-stage, and I said, "uh, what’s Pip doing?" They shrugged - "Guess he’s on auto-pilot!" During the break, I asked Pip what happened. "Auto-pilot". Haha - I guess that tells you how used to a set list he was.

So at the next show in Val Caron, I hid in the audience, and just as he was about to start the song, I held up a banner "ME AND JESUS". Haha - too funny! Nice cue card!

The following night we played in Timmins.  I grabbed a kid in the audience and said, "When Pip sits down to play the next song, you hold up this banner..."  BAM!   It worked great!

Needless to say, Pip is now playing "Me and Jesus" on cue.
Posted by Scott Jackson at 1:09 PM No comments: