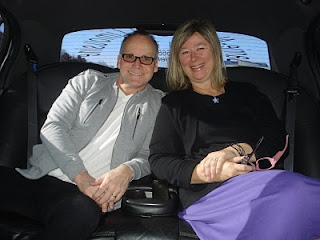 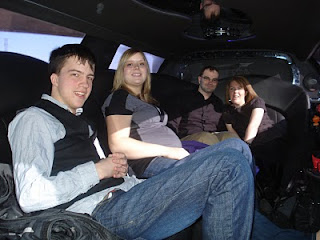 Saturday evening a small group of us ventured off to see Steven Curtis Chapman and Geoff Moore in Toronto.

SCC has not had a major radio hit for a few years. Certainly nothing that rivals “The Great Adventure”or “Dive”. Still Queensway was packed out - there were a few seats in the nose bleed section.

Not being a loyal SCC fan, I found it refreshing to hear all the hits performed in a mostly unplugged format. And since a number of songs were co-written with Geoff Moore, it was a blast having Geoff sing those songs with SCC.

“The Great Adventure”, “Speechless (SCC hits) and “A Friend Like U” and “Listen To Our Hearts” (Geoff hits) were great performances, enhanced as a duet
If only someone would tell Steven to cut the song introductions down to five minutes, his shows would have a much better flow. But then who is going to tell SCC that he talks too much? Haha!. 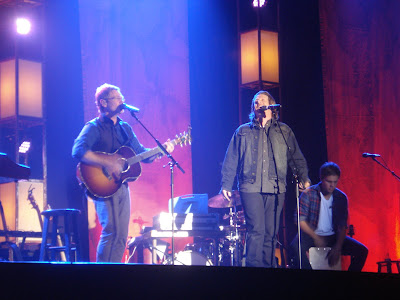 "All Because Of Jesus" 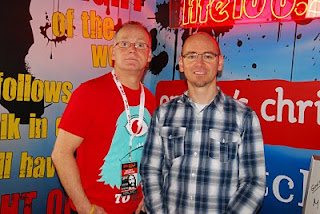 The theme was “All Because Of Jesus”. Truly, it sums up what it’s all about. It’s why LIFE 100.3 exists. And, it’s why we’ve chosen to be Christians.

Sharathon is the one time of the year when we talk about finances. After all, we’re listener supported and in two days more than $400,000 was pledged by 1,600 listeners.

Thanks to the artists who shared their music with us, in some live studio performances. 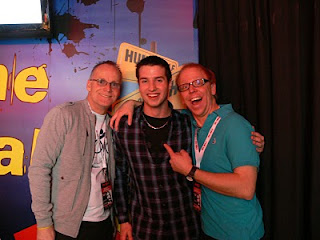 Andy Taylor’s “Good and Faithful One”, Miranda Fox “I Run To You”, To Tell’s “Safe To Say”, Jody Cross’s “Show Us Your Glory” and Levi denBok’s “Hallelujah”. Each performance was captured on video and saved on the LIFE 100.3 website.

Thanks to the churches who visited to take pledges in Phone Central. Especially those who traveled from out of town.

Thanks to listeners everywhere in Central Ontario who pledged to keep LIFE 100.3 strong, stable and active for another year of radio ministry. 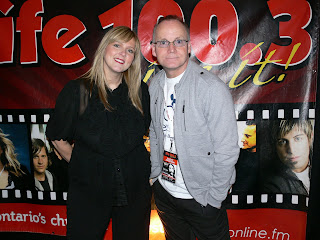 Because of your donations we can rebuild our production studio and replace tired equipment. We’ll get a phone app so you can listen to LIFE on your iPhone. We’ll buy a jumbo inflatable mascot to take on location. And 50% of the purchase of a new Street Team vehicle is banked with the other 50% on next year’s Sharathon vision list.

LIFE 100.3 is a remarkable station. Maybe it’s our staff - skilled, passionate and talented. Certainly it’s the LIFE listeners who share the vision. 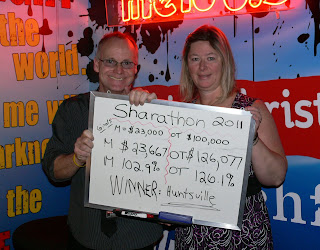 And, for reasons I cannot explain, God provides for our needs - and then some!

Thanks all! Bless you! Alright!

(Photos - Jody, Levi, Miranda, Janice and me)
Posted by Scott Jackson at 8:25 PM No comments:

I like reading other people’s devotions. It’s interesting to see how God is impacting someone else's life. When I "do" their devotion, I learn something new and possibly experience what they have discovered.

Last week, I read a blog from Carey Nieuwhof at Connexus Church in Barrie. He shared a cool devotion about “Confession”. Basically, he says, we neglect to confess our sins, we blame each other and judge each other. As Leaders, if we blame, we are a) poisoning our culture; b) demotivating our team and c) stunting progress of our workplace.

Therefore, Carey says, we should humble ourselves and make confession a regular part of prayer.

* My leadership at LIFE 100.3 - wisdom, concentration and faithfulness.
* LIFE’s Sharathon this week - those who pledge would remember to give
* I have numbness in my left index finger and it is now shooting up my entire left arm. I’m concerned. Yes, I’ve had xrays.
* A friend of mine has depression and it’s not under control.
* A non-radio project I am trying to develop in my spare time.

Have a great week!
Posted by Scott Jackson at 7:03 AM No comments: 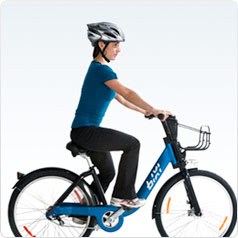 Two years ago I was in Barcelona, Spain. The city has an awesome biking city whereby you go to a bike “station”, (like a bus stop) and you swipe your card and get a “city bike” and bike to your destination. You drop off your bike at the nearest “bike station”. I love it!

Now Toronto is doing it!

The City of Toronto and the Public Bike System Company are launching the BIXI Toronto program - 1,000 bikes, 80 BIXI stations. Last year after City Council approved the program, 1,000 people bought memberships to use the system.

What a great idea! Possibly fewer cars and a healthy way to travel. Man, I hope there’s bikes in Heaven!
Posted by Scott Jackson at 9:27 AM No comments:

A few days ago we went to see the movie "Beastly". It's a modern day version of "Beauty and the Beast".

Alex Pettyfer is the male star, an egotistical high school guy, who loves his looks and money and thinks those qualities are the most important things, and ugly people are worthless. Vanessa Hudgens is the girl who plays the beauty. Neil Patrick Smith plays a blind tutor to Alex's character, the Beast.

I suppose the moviemakers are targeting a young audience so there's some high school "junk" in the movie - just so you know. But the overall message is good - it's not what you see on the outside but what's on the inside that really matters. And that message is conveyed clearly.

For another point of view, check out Plugged In.

Posted by Scott Jackson at 7:54 PM No comments:

Idol, Marilyn and the Griffith

It happened at the last minute - I got studio tickets to see American Idol! Thanks to Jen Melanson at LIFE 100.3. (She is very resourcesful!)

Idol is held at CBS Television City, in Hollywood. Wait - isn't this a FOX-TV show? Uh...ok. Inside, after 30 minutes of sound checks with the audience, the show began. There were no second takes - everything rolled out just as you see it on TV. Being in the audience was cool, but I didn't see anything behind the scenes - like singer soundchecks or re-takes or flubs. Nothing. During the commercial breaks, Ryan Seacrest visited Randy, Jennifer and Steven. Four bodyguards surrounded the judges table.

I wish I had photos as a souvenir but we weren't allowed to take photos - so all I have is a ticket stub as a souvenir. The really odd thing is that "American Idol, live!" was actually recorded. It was live to tape, but played back on TV the following night. Hmm!

American Idol has been on my "bucket list" for a few years, never thinking it would happen. Also on the bucket list, for 30 years, has been a visit to Marilyn Monroes grave/crypt. She died in 1962 so the closest I can get, is near the grave. She is buried at Westwood Memorial Park in Westwood, west of Los Angeles. It cost $140 to taxi around, trying to find it, going to the wrong place, driving in circles, etc. That's what happens when you try to do your own tour, instead of hooking up with a professional tour. 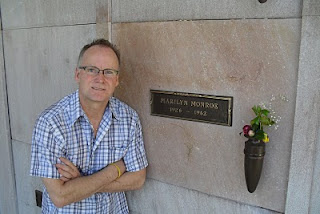 After visiting the crypt, I went to her house, just two miles away, where she was found dead. Couldn't see much because the gates conceal the property. It's small, in a residential section of Brentwood. The woman across the street I spoke with knew it "was Marilyn Monroe's house".

One thing is for sure - Hollywood is for movie stars and Marilyn Monroe still rules Hollywood. Everywhere you look.

Lastly, a trip to the Griffith Observatory, in the Hollywood Hills, just east of the famous Hollywood sign. We ran out of time during the day, so we taxied up at night. Most people probably go to see "science stuff" - like moon rocks, and asteriods, etc. Me- ? I went to see the location for the fight scene in "Rebel Without A Cause", starring James Dean. 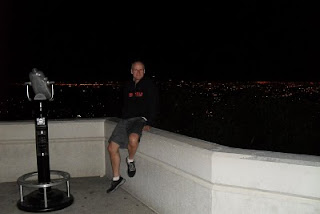 The location wasn't hard to find. Well - I've seen the movie enough to know. It was cool and a bit haunting to be on the exact spot of a famous movie scene.

The other stuff in L.A. - the Whisky a Go Go, Venice Beach, KIIS-FM - it was all a bonus to Idol, Marilyn and the Griffith!
Posted by Scott Jackson at 10:21 AM 2 comments:

Since my Mom and Dad moved to Barrie from Toronto years ago, they loved being near the Bay. I think it reminds them of the cottage we had in Peterborough. 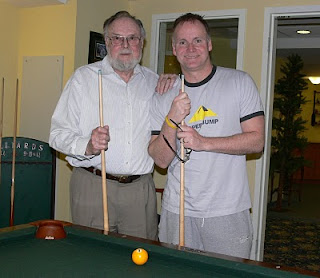 Often in the summer they would take a leisurely ride around Centennial Park and stop for a while at Minet’s Point and watch the windsurfers crash through the water.

My Dad would avoid driving on busy roads and city driving. He told me the only time he would go back to Toronto is in a wooden box! He doesn’t like the 400 and when I pick him up, I try to take a side road or Highway 11.

Dad always trades for a new car. He doesn’t want someone else’s car problems. And when he trades, the car has embarrassing low mileage! 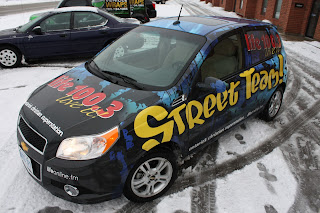 He’s almost proud of how little he uses the car!.Last month Dad told me he wanted to get rid of the car. I tried to talk him out of it by reminding him of how much he likes to drive around the Bay in the summer. He doesn’t have to drive the car every day. Just knowing the convenience of the car is available is nice, but he disagreed. Maybe the decision to stop driving, because of age, was bothering me more than him. He has no health issues. His mind is sharp. He’s on top of all current events. Why lose the convenience of driving?
. 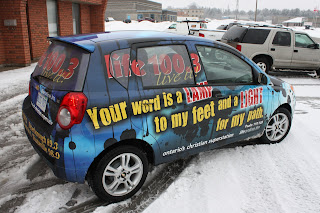 “I want to get rid of it,” he said. And, without ask my asking, he offered to donate it to LIFE 100.3. It's practically new. It has less than 5,000km on it! But I can see that getting rid of the car has given him peace of mind.

So, LIFE 100.3 is the beneficiary of Dad's Chev Aveo. Jen Melanson had it wrapped with the LIFE logo and other fun graphics so it matches our other vehicles "in the fleet"! Watch for us on location! Ask me about my Dad's donation.

All of a sudden I have a few hundred friends.

Friends? Uh, how about “acquaintances?” These people are not my friends. (Sorry - that sounded mean.)

Ok, let’s define “what is a friend”? A friend is someone who comes to your house, drinks your Coke and watches a movie with me. That’s a friend. That’s the official definition. Got it?

Wait a minute. What’s an acquaintance? An acquaintance is someone whom I’ve talked to face to face or electronically. I had some level of interaction.

So some of these “acquaintances” are actually strangers. I don’t even know who they are! And you never take candy from a stranger. So, why am I accepting a stranger as a friend? Am I starved for fake friends? Or am I competing with Little Billy Chase to have as many friends as him? (He’s always 200 more than me.) Yes, I am desperately trying to beat him.

Hold on! What's with all these people who have 2,000 friends? That's not normal. You can't have 2,000 watching movies on your couch!

Does Ashton Kutcher really know all of his “friends”? (Maybe the women.)

Maybe some people have really boring lives and through the magic of Facebook I’ve convinced them that my life is actually fascinating and they want to know all about my escapades, the rock stars I meet, the extremely exciting places I travel to and take photos of. That’s it. I’m an entertainer.

Reality check. How many real friends do I really have? Man, if I answered that, Facebook would go bankrupt.

Friend request. Fine. Ok, accept. I’ll take all the friends I can get.
Posted by Scott Jackson at 1:41 PM 3 comments: