Yup, still watching American Idol. It may not be the best season for talent but there's some great moments.

I'd be happy if either Candice Glover or Kree Harrison won. The rest of the Idols don't seem worthy of being "the next pop star".

When the season started, everyone was hating on Nicki Minaj. She was weird. Really weird. But she's found her place and her critiques are the most helpful and honest of all of them. Keith Urban has good comments and Jimmy Iovine has found his groove. I think the critiques of the judges has improved significantly since Simon, Paula, and the rest of them moved on.

The one thing I don't like about American Idol is the music choices - I'm so tired of hearing the 60's and 70's songs sung by 20 year olds. I mean, yes those songs are classics, but how many times do we have to hear a song by Aretha or the Supremes. Just tired of that. X Factor lets their contestants cover songs from the last few years - it's a more contemporary show.

Sharathon, if you did not know, is our on-air fundraiser for LIFE 100.3.  It is a 2-day presentation, pre-empting regular programming, all of it - news, commercials, countdowns - all of it gone. For two days, we share the vision of LIFE 100.3 and ask for donations, since we are listener supported.
This year it was a circus of guests - pastors bringing a team of people, artists performing. Almost every hour there was a guest in the studio. And on the phones, there was a rotating shift of volunteers.

Throughout the two days, we've had fewer calls compared to last year, almost 30% fewer calls, but the real dollar amount is higher, which means our listeners are giving more than before, which is awesome!

At 7pm tonight, it will be over, the decorations will come down and the After Party will begin, for those who have not collapsed from broadcast exhaustion!

Here is a video of Anthem for Today, performing "Inside Out" at LIFE.  Thanks to Andrew Hamilton from iproclaim for shooting a library of videos!

As a kid I collected 45's. I was an AM radio guy, loving the singles, rarely the albums. Now, with iTunes, the hit single is back!  So, here's what's spinning in my iPod this week:

"A Little Louder" by Anthem For Today. Of course it's no surprise. Yes, I manage the band. Every song is great! I love my boys! 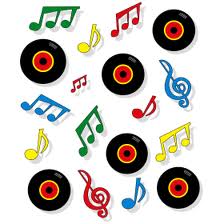 "Crime Of The Century" by Supertramp. The older this album gets, the better it sounds. Amazing to hear the imagination of these guys, in the mid-1970's, without computer enhancement. Their songwriting is the farthest thing from Top 40, and coming from a Top 40 guy, it's an odd choice. Best track "Asylum".

"Languages" by Owen Thomas, former lead singer with The Elms. It's mellower than most Elms music. Many of the songs sneak by unnoticed but the opening track - "Houdini" is truly catchy. And I'm reminded of the goofy video of Owen dangling upside down in a straight jacket!

In the "Mix Playlist", I'm spinning "Glass Hosues" by The Classic Crime, "Begin Again" by Taylor Swift, "Ready For The World" by Ruslan and Lecrae, "Beat Of Your Heart" by Young Chozen, "Raindrops" by The Color, "One More Shot" by the Rolling Stones.

WHY I LOVE SHARATHON

When I think of Sharathon - I think back to where it began for me - in Nashville at WAY-FM in 1997.  It was my introduction to listener supported radio. Before WAY-FM, my radio life was all in secular radio, where we always needed to be first - first in the ratings, playing the new song before our competitor; doing everything first, and best.

Listener supported radio is different. We don’t do it to win ratings; we do it to serve. When our listeners are paying the bill, we naturally need to please them. 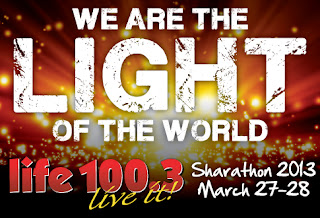 Each Spring LIFE 100.3 presents Sharathon - it’s our radio fundraiser. I’ve heard a lot of cheesy radio fundraisers where the DJs are begging for money, - "or we’ll go off the air!"

At LIFE, we approach it all differently. Our staff looks forward to Sharathon! We play back tape of listeners who have stories about God and about Christian music. By sharing their stories, we encourage thousands of people to get God back in their lives. At least, that’s our hope.

Christian radio in general, and LIFE 100.3 specifically, is like a battery charge for the spirit of our listeners. The music is like a trigger to get their lives on track with Christ.

When I think of defining moments, two songs come to mind.

The first one is by Casting Crowns - "Praise You In The Storm". Each time I hear the song it reminds me that life is hard, bad stuff happens but we gotta persevere. And we can do it, with God. Not without God. It’s not a nice, fluffy song - it’s a real reminder about getting through the storm of life.

The other song is "I Can Only Imagine". It makes me think about a real day when I will meet God face to face. "Will I stand in Your presence or to my knees will I fall; Will I sing hallelujah, will I be able to speak at all."
Two great songs with specific messages that drive the thought into your heart.

To me, LIFE 100.3 is like a caretaker of these songs. Through LIFE, we’ve introduced these songs to a million people who otherwise would not have heard them.

Sharathon is a time when I’m reminded of all these things and the reason why I personally donate to LIFE 100.3. I work here because I want to be in ministry but it’s more than that. I’m a donor because I believe in what we do.

Sharathon - March 27-28. Two days where we share the vision and share the investment, not just because we like to listen, but so that it’s there for others, too.

One more week to Sharathon!
Posted by Scott Jackson at 9:32 PM 1 comment:

The 70's seem to be a very long time ago and it's hard to believe I'm in my 5th decade of radio!

When I was a board op in Peterborough at CHEX, I remember playing "Hollywood Nights" as a current song.  When I got to CKLC in Kingston my show included "Miss You" and "Running On Empty".

In 1979, disco music was still happening, and my boss gave me my own Saturday night show called "Night Flight" - a disco show. I remember asking my boss, "Am I going to get type-cast as the disco guy?" Back then the music in the studio was all on cart - one song per cartridge.  That was a time when you could physically hold the music in my hand!

As disco faded, something else happened just before 1980 - it was new wave! The Police, the Cars, Nick Lowe! Even Billy Joel recorded a new wave song!
Into the 80's, there were hair-bands and spandex worn by Triumph. There was synth pop that came from Europe, and the Canadians picked up on it - like Platinum Blonde. For years, you couldn’t get away from the synthesizer as the lead instrument and man did the rock fans hate it!

In the 80's it was common thinking that "the 70's sucked", until the 90's. Then we renamed the 70's a time of classic rock and retro, and it started to sound good again.

When the 90's grunge happened, I was working in Adult Contemporary radio playing Celine Dion while our rock competitor in Sudbury was playing Live and Nirvana. I remember seeing students on their way to school grungy, unwashed hair, wearing plaid.

I taught a radio class at Humber College in the late 90's at a time when Puff Daddy and Creed were playing opposite kinds of music and a student in my class said "hiphop is the new Top 40!" I think his comment was maybe five years ahead of its time.

Over the years I’ve seen several waves of boy bands, from the Osmonds (when I was a teen) through the New Kids On The Block, to the Backstreet Boys and now it’s New Direction. It seems music goes in cycles. We all know that.

Christian music doesn't have the kind of deep pop history. Oh how I wish there was a Christian version of Supertramp!  What would it have been like to have been a DJ on Christian radio playing Larry Norman and Keith Green as a current song, and introducing them in concert!

But you know what?  Each decade is "the good days" to someone. It's all history we enjoy to various extents, remember "where we were when". In 2013, there will be music fans reflecting on their Toby Mac collection!

Still, (a smile comes upon me when I think of this), I was on the air in the 70's! I was part of a music era that was in another universe - and I like that very much.
Posted by Scott Jackson at 10:16 AM No comments:

They're building a real Noah's Ark in Florida! Check this out! 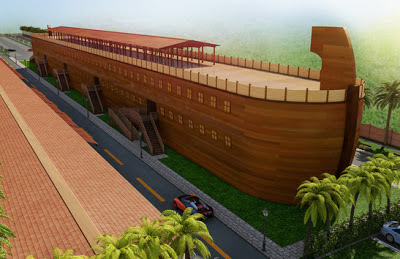 Posted by Scott Jackson at 4:36 PM No comments:

Faith Missionary Church in Wasaga Beach invited Anthem For Today to perform for the youth - it was a high energy, blistering double set of songs. Set 1 - worship; set 2 - concert-style, with added volume! 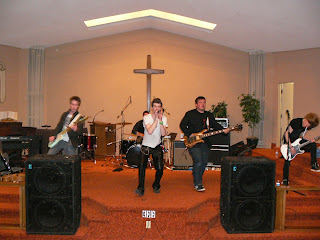 This was our first set with the full permanent band - Pip Lucas (lead vocals), Davey Hooper (guitar), G.I. Holm (guitar), Robbert van der Grift (bass) and JP Smits (drums). Tonight was a bit unusual, in that, we had Tyler Steingard from Barrie drumming for the worship set. Thank Ty! 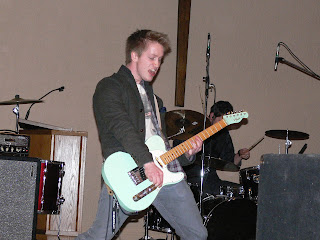 From a band standpoint, so many things went right. It began with the promoter, who followed our contract/rider to a tee - providing everything needed to make a happy band and a guarantee a great show. Often, promoters forget the little details and feed everyone pizza or food the band is allergic to, or a bad PA system, or something. Tonight in Wasaga - everything went awesomely! 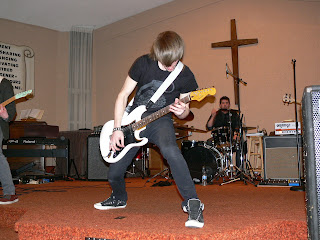 AFT kicked through their set of originals including the familiar radio songs "Inside Out" and "Falling Asleep At The Wheel", after which Pip shared his story of depression and cutting, leading into the song "Wake Up", co-written with Trevor McNevan of TFK and Jamie Aplin - the album producer. 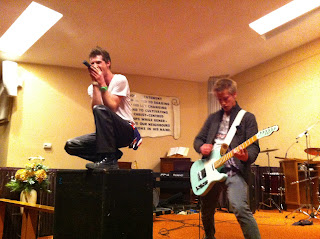 After the show, the audience hung out for an hour, chatting at the merch booth and getting stuff signed.

Thanks to Luke Langman for hosting the show and letting us come and play. Thanks to Heidi for the amazing dinner and keeping the boys fed to the brim!

If all shows could roll out like this one! 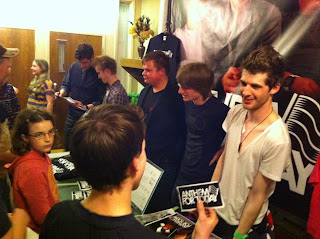