"We gotta hold on to hope
In this heartless world...."

Tim Skipper of House Of Heroes had 600 Air Raid 20 fans in the palm of his hand as the band played "So Far Away". HOH set lasted roughly 70 minutes, opening with "Elevator", followed by "God Save The Foolish Kings". 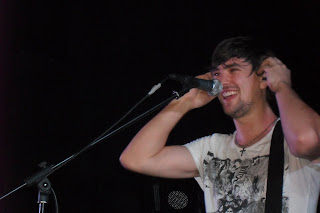 We nicknamed #20 "the big one", but really, they're all big. Air Raids seldom make a profit, mostly because overspend on bells and whistles, all to create a cool vibe throughout the night, and you may have noticed the extra power behind the lights both on stage and the batlights piecing the Barrie sky outside. It's all worth it! 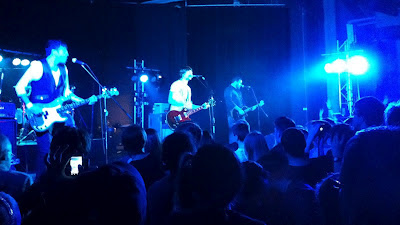 House of Heroes traveled to Barrie this afternoon, just in time for a 3pm soundcheck and drove to Buffalo immediately after. A tight schedule. So glad the winter weather cooperated.

Our friends in Manic Drive not only handled the production of the entire show but they gave us a killer set of songs. Manic Drive are familiar with Air Raids, having played #4 at Barrie Central with TFK and #6 in Lindsay. But that was a long time ago! Shawn Cavallo is a solid frontman, no longer a kid, sharing his testimony and keeping it relevant. 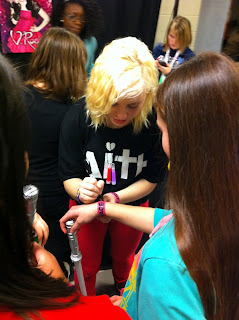 V. Rose flew to Barrie from California. She sang to tracks and stuck to her radio songs like "Battery" and "Not So Average" and ended the set with an interactive version of "Here I Am To Worship". Looks like the young girl teens loved it because after V.'s set, she was signing autographs and talking to fans right through the sets by Manic Drive and House of Heroes.

Barrie's Behold The City opened the show with a screamo set of hardcore songs about life with Christ.

This is the first Air Raid where all the acts stopped their sets to share about the Lord. Tonight we heard BTC talk about the love of Christ, V. Rose speaking about God's unique creation, Manic Drive's Shawn Cavallo gave his personal testimony and Tim Skipper with HOH shared a heartfelt call to forgiveness - forgive to others and accepting their forgiveness offered to us. 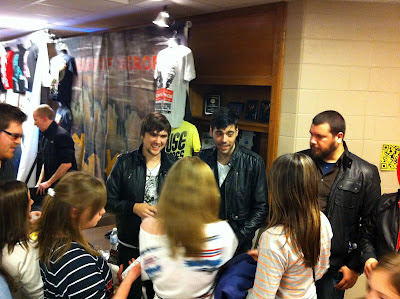 The Air Raids of the last five years have required the hands of nearly the entire LIFE staff - full-time and part-time. Everyone was there helping; some loading in gear, others manning an artist merch booth, or selling water and pizza, coralling the incoming crowd, on-stage hosting or backstage interviewing and shoot photos. For me, it's very rewarding to see the entire staff come together for these large events. 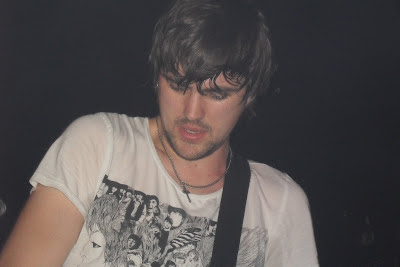 Air Raid 20 is now in the LIFE 100.3 concert history books! Be sure to watch the LIFE facebook page on February 27 for a video montage of the show!

Living in the Oro Station Super City Centre Casino and Resort is awesome and interesting.

Our weather is different than Barrie, which is only 20km down the road. Barrie gets hit with snow; we don't even shovel the driveway.

I live on a cove of Lake Simcoe, so the property is protected from the high winds and waves. This being my first winter here, I was anxious to experience walking on the frozen lake. It's not yet frozen solid enough to walk on, although some crazy snowmobilers have been splashing over the shore. I've seen ice, more snow, ice building, then by nightfall it's melted. Next day, more ice, and by night, the crashing waves were rolling under the frozen ice, pushing it back to the shore - and then melt. I've watched it ice up and melt about a dozen times. 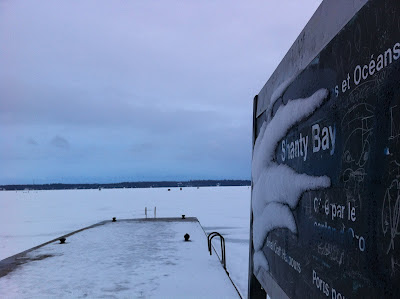 On the way home today I stopped off in Shanty Bay. Kempenfelt Bay was not only frozen, but scattered with ice huts!

Yes, only a few km away, where Kempenfelt Bay borders Lake Simcoe, the ice ended and the open Lake was water. Only a few feet of ice hugged the shore. 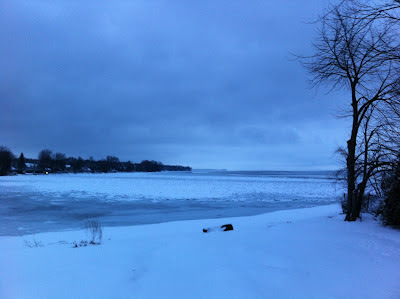 Thinking about winter, this is my second year ENJOYING it. Previously I've hated winter but now I'm enjoying the change of seasons. Today, I walked around the park, enjoying the stillness of the air, no wind, very light flurries and fresh white snow covering the trees.

Hung out with a friend, Friday, watched Idol PVR. Saw Whosarmy at Uxbridge Baptist Church on Saturday with Janice - fun night with the band; Spoke at Living For Jesus Sunday morning (pastor approved!) and jammed with Ed and friends Sunday night. They stretched me. Uplifting!

Today, catching up on weekend correspondence from home. It's good to stay home, pray, buffer my brain. I'm blessed to be in this position. I think about it all the time.

Reading: Psalm 106;1-3 "We will celebrate and praise you Lord. You are good to us and your love never fails. No one can praise you enough for all the mighty things you have done. You bless those people who are honest and fair in everything they do."

Praying about: CRTC response letter to Toronto application; my son's move; doctor appointment on Wednesday; a friend in court.

Why post a personal journal entry? I've journalled my spirital walk since 1994. Many highs and lows. I see where I've been, I see progress and I see slumps. It reminds me that every day is a new day. I see my prayers that have been answered. Maybe my journal will encourage another guy to do the same.
Posted by Scott Jackson at 10:57 AM No comments: 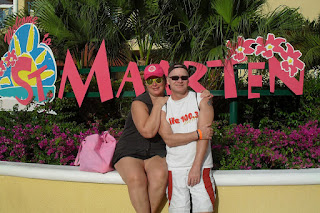 The coldest week of the year is the first week of February so that's the perfect time to be hangin' out on the pool deck of a gi-normous ship in the tropical Caribbean Sea! This isn't the first time, or the second, or the third - ok I've lost count! Maybe that's why, when the taxi pulls up the port, there is a familiar sigh. 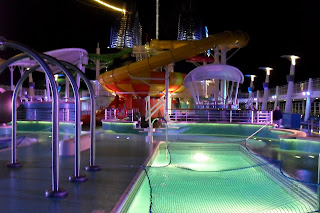 Right - The 15th floor, at night. There are 3 tube slides in the back. 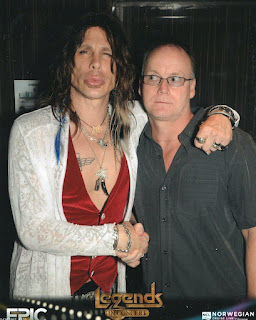 Above - Steven Tyler lookalike, after his performance at "Legends" in the Epic Theatre. 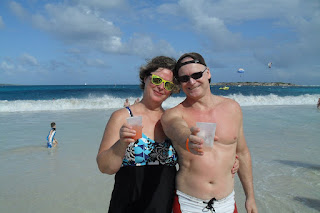 Right - A quick stop at St. Maarten, an island that is half owned by the Holland and half by France. This is the beach on the French side.


Right - My first experience repelling. Probably the last. The first backward step off the fourth floor, was total panic! Sky-diving would be a definite "no"! 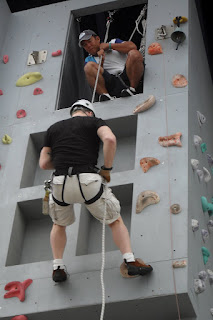 St. Maarten, St. Thomas and Nassau. Three ports, lots of sun, great food, on board the Norweigian Epic.
Posted by Scott Jackson at 2:01 PM No comments:

Posted by Scott Jackson at 5:37 PM No comments:

FILTER OUT THE JUNK

Junk desensitizes me. Too much violence in movies, too many scantily dressed people in magazines, hanging with people who bring me down rather than build me up, songs that separate me from God. It’s impossible to get away from it all but the problem is that when junk comes in, I fall in that groove and I only notice it when I sit down to do devotions and feel like a slimey hypocrite - so I skip doing devotions all together.

Other days are a struggle for devotions. If I have a lousy time doing devotions, then the rest of the day follows just like that. And when that happens, I’m less excited about doing devotions - and the cycle continues.

Last week I studied Colossians 2 verse 6 which says “You have accepted Christ Jesus as your Lord. Now keep on following him.” The last part - keep on following him - it popped off the page! I'm a Christian. Following Jesus is what life is all about. Why is it so difficult to focus?

It's the junk. It keeps my mind off of Jesus. The Holy Spirit reminds me "Hello, Scott. This is junk, here!" Then I have to make a choice - junk or Jesus?

So I encourage myself - don’t give up. I can do this. I ask God to help me flush out the junk so I can be excited for devotions. I pray that quite regularly.