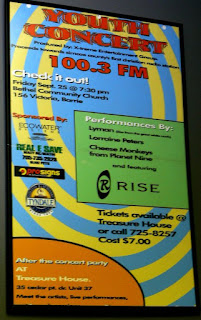 The first Air Raid was before LIFE 100.3 was on the air. In fact, the name "LIFE 100.3" had not been revealed. It was a secret! Nobody knew the name except my wife Janice, our daughter Crystal and son Brett. Even our Board of Directors did not know the name of LIFE 100.3. And believe it or not, the secret was kept until one month before, when the training of the DJs began!

In 1998, I was fundraising to build LIFE and I thought a concert would be a good idea. Back then, I thought concerts were fun events and big money makers. Now, on the eve of Air Raid 25 I can tell you that, yes they are fun, but very stressful - there is so much to organize and many people involved.

And as for making money? Forget it. Of the 24 Air Raids we've done, five have made money, barely. The cost to put on a show, recently, is between $9,000 and $18,000 depending on the artist and how many flights are required. The cheaper shows are those where the artist busses in to town.

The first Air Raid was actually called "Youth Concert". Ya, I'm serious!  We didn't name Air Raid until #2 and the name came from Duncan Taylor, a teenager at the time, who was on my radio committee to build LIFE 100.3. 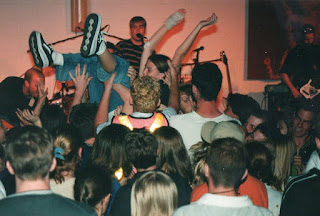 It was held September 25, 1998 at Bethel Community Church in Barrie. The headliner was Rise, with Lyman (ska from the great white north), Lorrain Peters and the Cheese Monkeys From Planet 9. (featuring Daniel Biro, now the bassist of Hawk Nelson and Marcel Preston now the leader of Sky Terminal. Both Hawk and ST have played Air Raid shows.)

At the first "Air Raid/Youth Concert", in addition to charging admission, we were going to take up an offering to fund LIFE 100.3.  We desperately needed $200,000 to build the station.

Just before the show started, I was so grateful to see a lineup of kids at the door, excited that a Christian rock concert was happening, and a Christian radio station was in the near future, I changed my mind.  No love offering!  That sounded so typically churchy. And, calculating the profit, I figured if I got $1 from 200 kids I would have ....let's see....$200!  Not exactly a successful fundraiser!

A love offering would sounded so needy, as they typically are.  I said to one of my Directors, "Let's skip the love offering. We're not going to make a dent toward our fundraising budget. Let's just be happy that 200 kids came to the show!"  It was the right decision.

At the first show, there was crowd surfing.  Man, I took some heat for that. "It's worldly!" I was told. As I look back at the photos, I noticed one of them was the pastor's son!  haha! 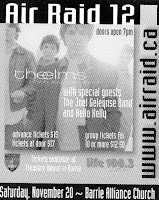 The first Air Raid was produced by two friends Lorne Kelly and Steve Burchell. They organized the entire show - the sound, the bands, all of it. They had show-experience, which I did not. Had Lorne and Steve not volunteered to direct the show, I don't think it would have happened.

Since then we've produced 24 Air Raids. All of them featuring Ontario artists. When Air Raid 12 was booked, The Elms from Indiana were a hot band and they were touring so we booked a show on their tour. After The Elms, we often, but not always, included American acts for both variety, and because we were running out of Canadian bands to headline.

The Air Radio concert series is my baby. I love producing shows. All of it! Choosing the bands, teaching the LIFE Promotions Coordinator show how to organize the many details. I love the long-term relationships I've developed with almost all of the Ontario bands. It's very rewarding.

And while, I hope to break even on the shows, I never expect to.  I know that's bad business but Air Raid is a music ministry. It's a night of Christian music, a brief Jesus message and a showcase exposure for local bands. I love the thread that connects it all.

BTW - click here for all Air Raid info.
Posted by Scott Jackson at 7:26 AM No comments:

I WASN'T A KID PERSON....UNTIL NOW

It's true. I've not been much of "a kid person".  I think it's the sticky fingers near my CDs that makes me cautious!

When my kids were young, kid-talk wasn't in my wheel house. Some people are great talking to kids, with the "gootchie-gootchie-goo" - but it just wasn't me.

I went to my kids ball games, and school showcases and church presentations and I really liked watching MY kids do their thing but having to wait for all the other kids to do their thing was frustrating.


﻿ In North Bay, when Crystal was about ten years old she did a skit in a church play about sitting on the fence. "I can't make up my mind so I think I'll just sit on the fence." I don't know if she knew what she was representing in a spiritual sense, but I remember it being very profound when it came out of her mouth.
Both Crystal and Brett were very much into baseball and we enrolled them in a league every year. I have a recollection of a very young Brett in the outfield, sitting down, picking at the grass instead of watching where the ball was being batted. Many of the other youngsters were distracted as well. It was funny. 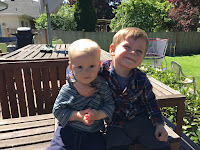 Brett will be 30 next year. It seems like forever since they were youngsters. So, I am out of practice.

But now, I'm a grandparent of four boys and the fun has begun. Plus, they're cute. Check out these super-cute pictures. My grandkids are cuter than YOUR grandkids!

Posted by Scott Jackson at 9:43 AM No comments: