Looking forward to seeing this movie "Salinger", the author of "Catcher In The Rye". The reviews have been fairly negative about production and even the purpose of documenting the story of a guy who didn't want to be bothered.

So, I'll buy my popcorn and watch the movie with my expectations lower.

Of course I'll have to find a theatre in Toronto because the movie is a limited release. 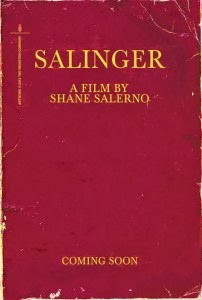 Posted by Scott Jackson at 2:56 PM No comments:

Today, Anthem For Today, the band I manage, was nominated for three Covenant Awards. Woo hoo!

The Covenant Awards are like the Grammy Awards, except these are all-Canadian and only Christian.

Up until today, I've been lukewarm about awards for Christian music. At the Dove Awards in Nashville, it seems every year MercyMe and Casting Crowns compete for awards like Artist of the Year or the Song of the Year. Who's better? I say - who cares? They're both great. Is one actually "better" than the other?

Whether it's the Academy Awards, the Grammys, the Doves - the acceptance speeches I really do enjoy. Often there's a humility exposed and a bit of a story behind the winner - I like that.

Today, at 1pm, the Covenant Award Nominees were announced live on a webstream. There was actually a ticker counting down to 1pm. I left the ticker open on my computer all morning.

Then we heard it - we (my band) heard our names announced as a nominee for New Artist Of The Year!  I nearly peed!  Then, two more - Modern Rock Album of the Year (for the album "A Little Louder") and Modern Rock Song for "Inside Out". (List of all nominees here)

All of my previous thoughts about the purpose of winning an award vanished. As an artist, nominations and awards are part of building a resume. People are more likely to book your band for a show when you have some awards to show. I'm not sure it proves that anyone is better than anybody else, but the honour is nice to have.

So, me and the boys will be suited up (as much as you suit up a rock star) and smelly pretty and ready to attend the 2013 Covenant Awards, held at the CTS building in Burlington on November 6th. Wish us luck!

Posted by Scott Jackson at 2:00 PM No comments:

IT STILL HAUNTS ME

I had to put my dog down in April. I think about it everyday. Last weekend, someone I work with had to put his cat down on very short notice.  A couple week's ago, Zach Havens from To Tell lost his dog in a car accident. AJ is having multiple problems with his (and my daughter's) cockapoo who is only 7. I was at emerg with his dog the other night. Another friend let his dog out to play, the dog "ran away" and was found three days later, dead in the next yard. He was devastated.﻿﻿﻿﻿﻿﻿﻿﻿

When I put Callie down in April, I found myself doing something I said I would "never" do. Never.  My wife and I agreed that as long as she was eating, going to the bathroom and going for walks, we could put up with anything else. But we didn't count on sneezing blood and bursting tumours.
﻿

I said, "no more dogs for a while," but there is this love in me that can only be given to a dog. Nothing else will fill the void.  (No, Jesus won't fill it, either.) It's my love for dogs - cuddling, chasing, pulling on a sock, barking back at them and their happy "welcome home!" when I arrive at the doorstep.  A home is not a home without a dog, so we bought another poodle, named Summer.

But, I'm haunted. Not a single day goes by when I don't think about Callie. And, unfortunately, I am not reflecting on the loving times, unless I force myself. I am haunted by the final minute, when I laid my face next to hers and talked to her as she was put to sleep.

It makes me sick.

I know it was the right thing to do - no regrets. But, I wonder how long I will remember that last minute as the life in her eyes - just stopped.

I can't stop thinking about it. It haunts me every day.

Summer is awesome. She fills the void and takes my love but, sadly, I can't shake it off. I'm not sure that I want to.
Posted by Scott Jackson at 9:45 PM 1 comment: