WAS IT REALLY THAT BAD? I can relate. My Dad died on January 5, so 2013 didn't start too well.  Then my dog died. There was more junk after that.

Hmmm. I wonder. I bet we say the same thing every year.

And every year isn't actually that bad. Not every year! But sometimes a couple of things taint the rest of the memories.

Instead of feeling lousy about the year that just finished, maybe we need to remember the good things that happened - the new friends we made, a vacation we took, a new plan we made, or even one great day.

Even though I faced loss in 2013, there were some great blessings, some very fun days, and stuff I learned that hopefully has made me a better person.  I'm not letting those bad things in 2013 taint the rest of a great year.
Posted by Scott Jackson at 9:43 AM

So much to do. So many cool places worth visiting. Of course it all depends on your passions.

I want to go to San Francisco. There’s so many places of interest - like the Golden Gate Bridge, the Haight Ashbury intersection where the hippies hung, Lombard (the crooked street) and of course Alcatraz! Apparently, you can be locked in a cell as part of the visit!

I want to see the site of the Buddy Holly plane crash in Clear Lake, Iowa. I don’t think there’s much else around there. Not sure what else I would do - see the monument and then...hmmm. But I’m drawn to it.

I want to see Mount Rushmore. I’ve seen lots of pictures. Maybe it isn’t as majestic in person as it’s made out to be. Only one way to know for sure.

I want to see Dealey Plaza in Dallas where President Kennedy was shot. And a visit to a couple of radio stations!

I want to see the intersection of 41 and 46 in California where James Dean was killed. Having seen his movies, been to the museum, and the gravesite, this would complete the trek of James Dean for me.

Overseas, I want to visit Stonehenge, in Wiltshire. I don’t know much about it, really. Seen a couple of A&E documentaries but being on site would be very interesting.

I want to journey by boat to the tip of Elephant Island on the tip of Antarctica. Hopefully there’s something to do once I get there, coz it’s a long ride. It better be worthwhile!

And, I really, REALLY, want to rent a road bike and ride a couple of laps along the Champs Elysees in Paris, then around the Eiffel Tower and up and down the Seine River, and maybe a solid ride from Evry to Paris.

Unfortunately, there was no camera available when many of my favourite moments took place. But, here's a few.

Laid down for another tattoo.

I've thought about a tat on my left inner forearm for a while. A number of creative pieces went through my mind. Of course the thing that needs the most consideration is, this is permanent. How will I feel about the message in five years?  Or more?  Might it contradict my state of mind? Will I wake up one day and think "it's dumb?" 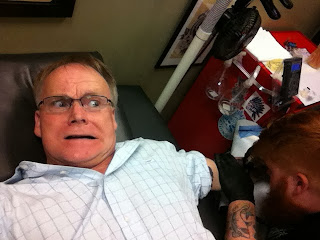 I spent a couple of months thinking about this one.

It is a lyric line to one of the songs by Anthem For Today. The song is "Inside Out" which won the Modern Rock Song of the Year award at the Covenant Awards. It was the award that clinched the idea.

"I'll shine like nobody's watching. The walls are down, I'm just what you see here. I'm inside out."

So, what if the band breaks up?  That doesn't affect my decision.  The tattoo isn't a tribute to the band but more so, a statement that rings true in my spirit. In fact, my band didn't even write the song. That honour goes to Trevor McNevan and Jamie Aplin. (Do you collect royalties from this?!) 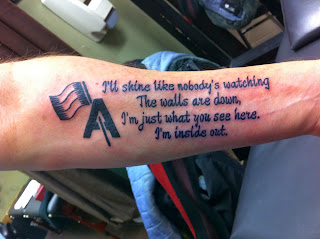 My connection to "Inside Out" came before my being the Band Manager. During the production process it was the first song I heard, still in a demo format and I was asked to contribute to the arrangement to make it radio-friendly. Then I helped market the song and it was played on 15 stations across Canada

And, fine, ok - it's true. It does capture my commitment and enthusiasm for the best band in Canada - ANTHEM FOR TODAY!

One final thought - if you're thinking about getting a tattoo, think about it, lots. Then think again. Ask other people for their thoughts. If you're still in the career-seeking period of life, maybe don't get tattooed where an employer will see it. But once your career is established, and your spouse approves -  - go for it!

(Just as I posted this blog, the song plays on the radio!)

STUFF THAT DOESN'T BUG ME

I see so many blogs written about things that bug people. Things that "need to change." Things that are wrong - with people, jobs, churches, leaders, entertainers - arrrrrg! No wonder half the population is on Prozac! So much negativity!

I thought I’d take the lead and list two dozen doesn't things of the stuff that DOESN’T bug me. 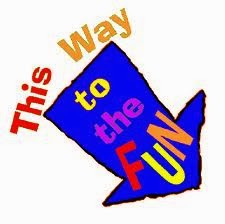 Ok, that’s the end of my list. Everything else bugs me!
Posted by Scott Jackson at 11:27 PM No comments: