NEWFOUNDLAND - It was a short visit, but one we've been waiting to do for a few years. In fact, this trip was delay by two weeks because of the hurricane blowing across the island.

Sherry Griffin, the Station Manager invited me to come, meet the staff, explore "the rock" and see VOAR after many years of only connecting via email. It was such a great visit, we loved it so much, that we're planning a return next summer to go whale and puffin watching!

Dinner at "Relish", hanging out at Battery Road, the view of the Harbour, Petty Harbour, Signal Hill, the Terry Fox site, Witless Bay, VOAR - dinner at Tina's!  Aside from the guy cutting his nails at the airport, it was all awesome!

Here's a video from Signal Hill. Probably the highlight, Cabot Tower, location of a bunch of wars but also the location where Marconi got his first radio wireless message from England, in 1901.


Posted by Scott Jackson at 5:21 PM No comments:

I see many postings about the passing of Sam (Sniderman) The Record Man. His store was what music was about in Toronto. Sam died yesterday -age 92.

I began collecting 45 records in 1969 and continued until the demise of the 45 in the early 90's. Needless to say, I (still) have a lot of vinyl!
My first job was as a part-time clerk at Sam The Record Man, first in the Newtonbrook Plaza in Willowdale (Toronto) and then we moved to Towne and Country Square, next to my high school. I worked there for five years.

Before getting hired, I wrote down every song on the CHUM chart posted about the 45's in the store. I noted the label and distributor - thus the start of become a teen Top 40 musicologist. It began at Sam's.

There aren't too many things I regret in life and those which I have are small, and probably silly to anyone but me. One of them is the night Elton John played in Toronto. It was a Monday night; I had to work at Sam's. It was the "Goodbye Yellow Brick Road" show. At the time, even as "Bennie and the Jets" played on the radio, I wasn't sorry about missing the show. But over time, as GYBR became a fixture in 70's music, and remains my all-time favourite album to this day, (with Ziggy Stardust being a close number two), I so wish I had been at that show. Haha - the 12-inch platform shoes, the Liberace-type glasses. "Oh Candy and Robby have you seen them, yet..." Ahhhhhh. 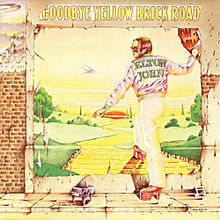 Janice and I would make many trips to Sam's main store on Yonge Street. We'd take the Cummer bus to the subway, then subway to Bloor. From Bloor, we'd walk south on Yonge Street, going in every poster and t-shirt store, with the final destination being Sam The Record Man where I would load up on "oldies".

Sam's was a hot spot for rock stars, too. Elton John was one of the many rock stars who shopped after hours, and then signed the wall. Sam put a frame over all the rock star autographs.

It was the only part-time job I had, before radio. Good job, great musical benefits. And $1.10 an hour.

WE SHOULD APOLOGIZE TO MR. BELL

My last blog observed the ridiculousness of digressing from 35mil photographic quality to a blurry iPhone photo - and thinking it's cool.

Here's another one. Texting. 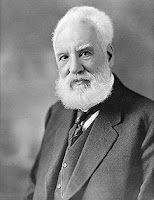 How often do you text instead of phoning? I text at a 20:1 ratio. How long does it take to write a text, wait for a response, respond as best as you can in a text and wait again? A simple conversation about meeting for dinner takes about a dozen texts to convey, in 10 minutes.

A phone call would take 10 seconds. Bam! Dinner is confirmed.

But still we prefer to text rather than phone!

Are we hiding behind a text and avoiding the verbal communication?  Maybe it's our way of filtering? Whatever it is, we are now typing with our thumbs, vastly mis-spelling every other word because of our fat thumbs and allowing the typo-correction-police who live somewhere inside the phone, figure out the correct spelling, which by the way, is often a very "wrong word"!

I wonder what Alexander Graham Bell would think of that!

I bet the iPhone 6 won't have a microphone.
Posted by Scott Jackson at 6:13 PM No comments:

A PHOTOGRAPHY SETBACK - HAS ANYONE NOTICED? 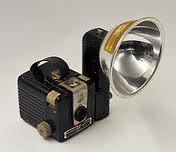 When I was a kid my parents gave me a Brownie camera. It was a square box camera with a big flash bulb that you had to replace every time you took a picture. And the heat from the bulbs! Yowser!  And remember those massive negative strips?!

Then I got a polaroid camera. Woo hoo! Take a photo and 30 seconds later the print would pop out of the camera! Wow - an instant photo! 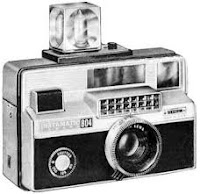 In my teens I splurged on an instamatic with a four-sided flash cube. You could take four photos with a flash before changing the cube. Which was scalding hot!  I started taking my camera to concerts. Of course I had to hide it because rock stars were afraid us photographers were making money off their images. On an instamatic? Right.


Then I moved up and got a Canon 35 mil with a 70-210 zoom lens. I took thousands of photos at rock concerts and some of my shots were amazing. I finagled photo passes from the promoters for Maple Leaf Gardens and the Ottawa Civic Centre and took some pretty high quality photos. I actually got skilled at it and I blew them up and framed them and, 20 years later, they're still on display at home.

If I was to list all the bands I've shot in concert, I could write a book. Actually, I am writing a book - a photo book of my favourite concert shots and the story behind getting the shot. A story? Ah yes - getting chased by security guards time after time. The STONES photo I almost didn't get and the KISS-security guy tried to bust my camera. And then there was the time .... never mind. You can read the book when it comes out.

Then, I moved to digital and bought a Minolta 7000. At last I could see the photos as I took them! No longer having to wait a week for prints.

And then...I got my iPhone. I love the iPhone but - hello?!  The camera...? Good grief! Convenient? Absolutely! But the quality of the photos is about the same as my polaroid!

You know what's funny? We think it's awesome! We're snapping photos of everyone, everywhere, all the time. We hold our iPhones up high in the air to take a photo of our favourite rock stars from 100 feet away as the stage lights wash out the faces - and don't get me started on the blurriness!  Haha - we're paying 10 times the amount for a concert ticket and the concert photos might as well be disposable! And - we think it's great!

What happened to setting the aperture, the shutter speed, the ISO? Those settings made our photos great. But now we have these futuristic smart phones with really no settings and a lens that is wearing out against the inside of our pockets and for some reason we think these photos look really great.

They're not. They're lousy. And we don't care. Photography has moved forward at a wonderful pace - but it seems to me with traded in photo quality for convenience.

Today we got word from the CRTC that our application for Christian radio in Toronto had been declined. Oh boy.

Yes, I had my hopes up. Actually, I was overly optimistic. Is it wrong to have high expectations?

I'm bummed. sitting at the computer - it's late. I'm reflecting on everything.  Our presentation to the CRTC was fabulous. My 88.1 team performed amazingly. My committee who worked behind the scenes to provide valuable information and prayer support were awesome. We did our homework by researching other applications. We role played. We watched the other applications. We hired two research companies. We produced a listener video that oozed passion and heart. And, at the Hearing, the Commissioners seemed to like us.

I felt that all of my years in radio culminated with this application. I am proud to say that it was my best work. I have no regrets. There was nothing more I could do.

However, I knew the strong possibility that another broadcaster could have submitted a better application with more stuff the CRTC liked, acting with deeper pockets and a longer track record. I understand. And that’s what happened. My friends at ROCK 95 got the 88.1 favour. They're good guys. 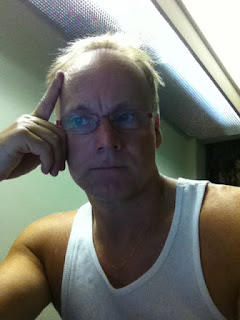 It’s been 12 hours since I got the lousy news. Maybe after a couple of nights sleep the world will make more sense.

If you know my Toby Mac story, of how one night I felt God’s warm hand on my head, my heart raced and I felt His calling over me last October...what does that mean?  Did I mis-read it?  Do I think I hear God’s voice but really I don’t?

How about the thousands of people who were praying for favour. Thousands. We prayed and prayed. What happened? Is God saying “no”?

And what about the people who said "God told me you are going to get 88.1"?  What's that about? Did they or didn't they? And what about the next time you feel God tell you to do something?  Maybe it's not God at all.

Is God saying, “Keep your eyes on LIFE 100.3 and don’t worry about acquiring more?”  Maybe.  Is God saying, “Hey, I want another Christian company for this job?"  Wait...maybe it’s ME. Maybe I’M the roadblock?

From a business angle, I can accept the CRTC decision. From a spiritual angle how do you really know what God wants you to do?

I guess I’m more than a fan of Christian music.  I’m an advocate.  I do more than listen to it - I share it and promote it. There’s one thing that is noticeably absent from Christian music - buzz.

This morning on a competing station I heard the DJ talk about Jessica Simpson’s weight loss since giving birth. She’s on some new diet plan.

I read about the classic rock song by Thin Lizzy “The Boys Are Back In Town” which being used a part of the Republican's campaign. The singer is deceased - his Mom is angry.

Axel Rose is suing Guitar Hero about the use of Slash’s image to promote the game.

Lady Gaga has a started a perfume line.

Maria Carey is a judge on American Idol

These headlines are less than a week old and like them or not, people talk about this stuff, like it’s added value to a song.  It’s almost like the songs are secondary to the artists’ lives.

In Christian music, we don’t have this kind of buzz. We don’t hear about artists launching perfume lines, or lawsuits, or DUI’s, etc. In fact, we don’t hear much at all, other than, so and so is on tour.

As the manager of a radio station I am constantly thinking about marketing and involvement.  How can we promote LIFE 100.3?  And what else do we do, beyond playing music and giving away prizes.  Well, if you listen, there is always something going on - an event, a goodwill campaign, a talent search, a VBS blessing - something. And that’s why we do it - for station buzz. So listeners have another reason to talk about our radio station, then to listen, and ultimately to hear the message. But it begins with buzz.

I’m sure Christian artists have buzz that’s worth sharing. I just don’t hear about much beyond the music. But I do hear Christian music fans talking about secular music stories. Hmmm.
Posted by Scott Jackson at 9:52 AM 3 comments: