The last few months been a bit exciting for me, in terms of drumming. Several invitations have come along, all a surprise, each different, all good fun.

Today Chris Bray was scheduled to play at West Oro Baptist Church. This was his return engagement, performing worship songs from his new CD "Hope Arise" - including "Salvation Belongs To Our God", "More Each Day" and several other familiar songs. West Oro is an enthusiastic church - small but mighty! And Pastor Rob Spicer enjoys all kinds of music. I even spotted him rockin' out at Air Raid 20! Haha! 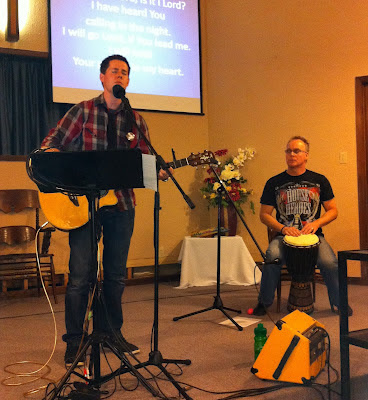 While hanging out in the afternoon at my house, I gave Chris a tour of my future "man cave". My Roland kit was still unpacked from the last gig and along side was my djembe. Chris asked if I wanted to play tonight. "Oh I don't know!" I said, actually hoping he would ask me at least once more. 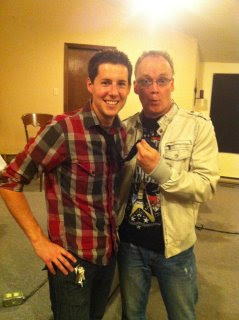 At the church, after loading in, setting up merch and doing the soundcheck of Chris and his guitar, he asked me to get my djembe from home, and without a soundcheck and without even having played together - ever - there we were. "Called" (Chris' own song) "Mighty To Save" which I was familiar with from my previous band Ascension, (albeit on a full kit, not a djembe), and "How Great Is Our God". Man, what a hoot!

Chris is a great songwriter, with a gift for mixing heartful worship songs about God with a pop vibe that sounds great on the radio. I know there's lots more catchy songs to come!

Today/Sunday, I'm subbing at Willow Creek in Midhurst at 10am. Hmmm...maybe I could tour?!
Posted by Scott Jackson at 8:01 PM